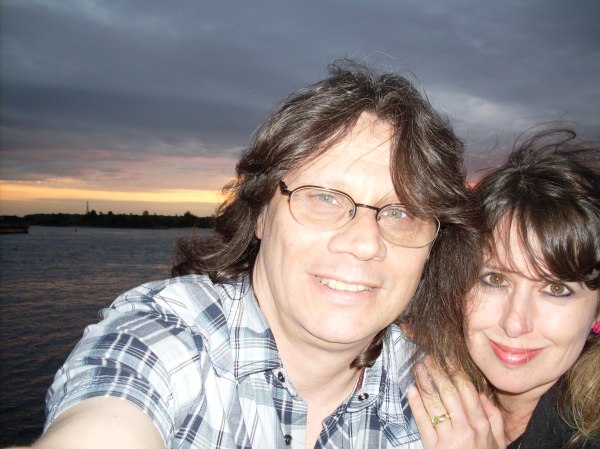 My husband Dennis and I, Manasquan, 2011

In the water at Belmar — OCTOBER 2007, unusually warm October day

The night we met Dick Dale at Surf Club

Once the electricity turned on in our home last night, my husband and I spent an unusual amount of time on the internet checking out all the damage and devastation to the Jersey Shore. I woke up this morning thinking that even though I’ve traveled all over the United States and have been to the Bahamas twice, the Jersey Shore will always be my favorite place in the world. It’s just absolutely magical in ways that an outsider can’t even imagine.

I’ve always pitied the ignorance of people who didn’t “get it” or just made up their mind to hate New Jersey from the little they saw on television, or perhaps a brief ride along the Parkway, not even exploring by getting off the Parkway!

Two years ago I brought a NYC friend to Spring Lake and he was raving about it and loved it more than what he had in New York. I love “SHOWING” people how wrong they were.

And I look forward to the day when New Jersey rebuilds itself and I can continue to prove people wrong!

As a child, my uncle Johnny had a summer bungalow in Seaside Heights and while I loved the beach, it was always the most fun going on the boardwalk at night. During the day I’d beg my grandmother to take me to the boardwalk, but she’d insist, “Wait ’til tonight … when it’s all lit up.” That is when my love affair with the boardwalk began.

As a teenager in early 1980s Seaside Heights was just as hip as New York City because it was where you could find all the punk rockers and even great punk rock clothes. For a brief period, Seaside Heights got a little dingy, but it always made a comeback. Some nights my family would take a ride down just for the night, to have dinner on the boardwalk and then go on rides. My sister and I always got free tickets to go on rides because we were cute girls. The guys who ran the rides just handed us a ton of tickets to use. We never were able to use them all so we always gave them away to little kids.

I’ve explored so many of the shores over the years: Point Pleasant, Neptune, Manasquan, Belmar, Keansburg, Ocean, Spring Lake, Cape May, Tom’s River, Brick, Sandy Hook, Long Beach Island/Surf City. It was all good. But my all time favorite Jersey shore was — and always will be Wildwood.

The Jersey Shore was the grand back drop to my husband and I falling in love. In the beginning, we went to the shore every chance we got. We started dating November 9, 2005 and that winter we were at the shore quite a bit. The shore was always so amazing off season. It was fun trying to scout out a place that was open.

We spent our first New Year’s Eve in Cape May. I remember shortly after midnight, running on the beach to kiss under the massive amount of stars. It was like being in a movie.

Other shore highlights in our romance include:

* The first time we met legendary Dick Dale at Joey Harrison’s Surf Club (which now no longer exists due to Hurricane Sandy).

* Going to see 105.5 DJ Joe Henry’s talent show on Sunday nights on the Beach in Seaside. Some of the young New Jersey talent blew away what you see on American Idol!

* Getting caught in a minor storm one night. It was sexy and romantic.

* Reading 1970s Circus magazines under the blanket on the beach before the official season began.

* Being able to walk a mile into the ocean thanks to a very long pier in Keansburg.

* The one October in 2007 when it was an unusually warm day and I got to go in the water.

* Our second year together when we first stayed at the Starlux in Wildwood. It was January and we decided to use the outdoor hot tub. It started snowing and we were catching snowflakes with our tongue. Then we get out an hour later and there was a sheet of ice over our towels! We just RAN upstairs to our room to get warm. It was hilarious.

* And of course, getting married in Neptune Township, November 9, 2011 by the Mayor of Neptune, Randy Bishop, who gave a most heartfelt ceremony; a day I will never forget … I now learned what “walking on air” meant — that is what you really do feel like when you are so in love and end up with the person of your dreams!

So many memories … as I’m sure so many people have … that would be book worthy.

I’ll never forget about 10 years ago, my friend Diane and I were down in Asbury Park to see free-form radio DJ Glen Jones. Diane commented to me, “Mare, wouldn’t it be great if Asbury Park could be built up again?” And sure enough, Asbury Park made a comeback. It became one of my favorite places with a bar at the beach (this bar even had beds to lay down on!) and a Boardwalk mall filled with art and clothing stores. Over the past few years, Asbury Park was becoming one of my favorite places to spend a Saturday with a girlfriend. So sad that what was refurnished and built up so beautifully is now destroyed.

Looking back to another horrific tragedy many years ago, it was just few days after 9/11 I went into New York City to “make peace” with it. I didn’t want to be scared. I didn’t want to let the terrorists win. And guess what? Hurricane Sandy isn’t going to win either. As soon as I get a chance, when getting gas isn’t such a problem, I will get right back down to the Jersey Shore and own it again! Amongst the devastation, I will find a little restaurant that is open and give them some business. Like I made the most of the power outage, I will make the most of it and enjoy it and do all I can to help others get their life back, while I get mine back.

And once again, New Jersey will prove the “haters” wrong!

10 comments on “Embracing the Jersey Shore”