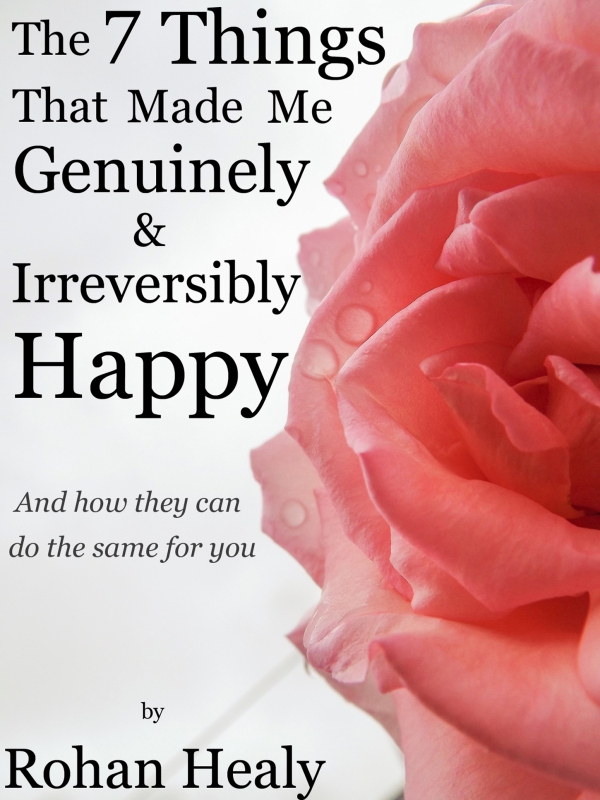 I am so happy I had the honor of interviewing Rohan Healy, author of “The 7 Things That Made Me Genuinely & Irreversibly Happy.”

I loved this book so much because I resonated with a lot of it and have been practicing some of the techniques since age 12 (like 26-year-old Rohan who started his quest at age 13). It’s just one of those books that while I was reading, I kept saying, “Yes, definitely!”

Since Rohan lives overseas in Ireland, we did the interview via email. I wish Rohan lots of success with his new book!

Maryanne: In how you described your journey of the “7 Things” from ages 13 to 25, you reached the point where it all came together. In a metaphysical sense, this realization may be described as finding the final key to the kingdom. Do you relate it that way?

Rohan: Yeah, although all of the 7 Things are great in their own right, it wasn’t until I put them all together that things really clicked in a long term, meaningful way. It was very much a power rangers type of situation, they need to work together and combine their powers to defeat the big bad guy haha!

The last 2 Things, chronologically speaking, for me were the Somatic Experiencing/Body psychology stuff and sorting out my relationships. Even though I’d had great success with the likes of Stoic philosophy and affirmations in the past, it wasn’t until I had all 7 pumping at once that I was able to shake off issues that I’d carried for many, many years.

And although I continue to study, to learn and seek out the good wisdom the world has to offer, I know that no matter what comes up, one of the 7 things will always get me back on track, and feeling good and happy in no time.

Maryanne: I love how you describe true happiness to that of a child, such as bouncing back quickly from a hard fall and the fact that you say you still cry and get upset. Some time ago I read a book about being happy ALL the time. It never quite sat with me because I think sad emotions can be cleansing. Is that also your take? How would you react if the one person (or pet) you loved more than anything in the world passed away?

Rohan: Oh absolutely. Some people are on a quest for endless bliss, to exist in a state of elated ecstasy as much as possible, but even bliss gets boring if it’s all you have. I don’t think you can call one human emotion “better” than any other, they all serve an equally important role. I define happiness not as living in a constant state of upbeat mania, but rather as being able to easily experience the full range of human emotion without getting stuck in one or another. If I lose a loved one to death I cry and I grieve which is natural and necessary. I also get angry, frustrated, melancholic and scared, but even while I’m in these emotional states I still have an overall understanding that everything is ok, I don’t get swept away by the existential nature of the current state. I know that contentment is my natural state, and that I’ll always be back there soon.

Oh and I don’t need someone to die to cry, I’m a total cry baby, songs, movies and Japanese Animes make me cry all the time haha! It’s physically impossible for me to read Oscar Wilde’s short story The Happy Prince without being reduced to a blubbering, sniffling puddle of tears! Having access to the full range of human emotions while living mostly in a state of contentment, that’s how I define happiness.

Maryanne:  I think it’s incredibly inspiring – not to mention mind blowing — that you figured all this stuff on your own without a college degree or even finishing high school. Do you know what your I.Q. is? Do you believe in I.Q.s?

Rohan: Haha, to be honest I learned more in the first 6 months after leaving high school than I did in the four years I spent there. I took an online I.Q test a few years ago, I think had 127 or 128. I’m not sure how much stock I place in the I.Q. test, I’ve heard a saying that goes “The only thing a high I.Q. proves is that you are good at doing I.Q. tests.” I think it’s a good test for a specific type of intellectual intelligence and pattern recognition, but it doesn’t account for other forms of intelligence like physical intelligence, sexual intelligence or some of the other forms of intelligence like the one’s described in Howard Gardner’s theory of multiple intelligences. I can’t take all the credit for my studies and discoveries, I was home schooled when I was young. Both of my parents are very clever and cool and would introduce me to great things. It was my dad who first showed me the Stoic Philosophy for example!

Maryanne: In my own quest for perfect happiness, the closer I’ve come to tapping into it, the less tolerance I have for ugly things in life such as gossip for instance. Over the past 10 years, when I hear gossip, I get horrible pains in my chest and I have to either change the subject or defend the situation with something positive, whereas in the past, gossip never affected me like that before. Would you say someone is on the right track when they get ill from something that is emotionally bad?

Rohan: Very much so. In the past year I’ve felt physically sick when even thinking about telling a lie or keeping a secret from someone important to me. I just can’t do it anymore, I’m incapable of putting up with or playing a part in deceit and deception. I can’t stand gossip or drama either, and a physical reaction is a good sign. I honestly worry for the people who can stand that kind of carry on, or worse still, the type who actually seems to gain satisfaction from drama, gossip, lies and bullying. Thank your bodily intelligence for letting you know that something is wrong, it’s a good sign, not everyone is as empathetic and intuitive!

Maryanne:  I’ve found that the happier I am, I feel strange listening to music that has degrading, condescending lyrics. [NOTE TO READERS: MAJOR EXAMPLE, Marianne Faithful’s “Why’dja Do It” or most Dead Boys songs or listening to Johnny Thunders’ misogynist rants on his live albums].

This is sad because some of my favorite bands from my teenage years are still amazing to me, musically, but I cringe when I hear the words. As a musician, was there any type of music you had to leave behind as you grew happier, or is there a way around it for you so you can still enjoy something you once did? (And if so, please share the secret!)

Rohan: Haha, I know the feeling. For me it’s more things like reality TV, talent shows and even a lot of the Jackass type stuff that I can’t stand anymore. Since becoming happier and more empathetic I can’t watch people hurt themselves or each other, I can’t watch bullying and cruelty, it makes me feel sick, which is the natural reaction to that kind of thing. I also find it much harder now to watch violence in films without any point to it. Since becoming happier I can no longer stand things like the Saw films, or other movies in the “Torture Porn” genre the way I could before. To be honest I can’t think of much music that I would listen to that would have degrading lyrics, as a teenager I listened mainly to punk music in which aggression was only ever aimed at authority and inequality and the rest of the time it was all about personal freedom, being yourself and all that. I don’t listen to punk as much these days but it’s more to do with changing tastes I think.

As you can see though there is plenty that I had to leave behind, thankfully nothing I needed, nor do I miss it, but music was not one of them. If you can still enjoy the music as a guilty pleasure from time to time go for it, but if it’s too hard just see it as a positive that you’ve outgrown it, and be thankful that it was there for you while you were young and while it was fun.

Maryanne: In regard to living in accordance with law of attraction, I pretty much nailed it as I can honestly say I’m happy 90 percent of the time (and my husband confirms this is true of me). But I’ve noticed that, as a woman, during my PMS cycle things start to go in a bit of a helpless, downward cycle for a day or so and I tend to attract less positive things, for example, while driving coming across someone who just ran a red light and me having to slam on my brakes; which would lead to another negative thing and then another. Why would you say these things happen to a healthy, positive person during that time of the month?

Rohan: Well the idea of abundance consciousness is that our attitudes, our opinions and moods determine the vibe we put out, and the vibe we put out determines the kinds of people and opportunities that we attract. So if your mood is being effected by the hormones and natural chemicals associated with the menstrual cycle, it stands to reason that your vibe would be effected and so too would be the things coming into your life. I mean if I go too long without eating I become as grumpy as the next guy, you can’t beat physiology.

Maryanne:  How long did it take you to write your book? What is next for you?

Rohan: I began writing The 7 Things in October 2012, so I guess around 3 months from beginning to end. I took a very casual approach early on though, I’d say 60 percent of the book was actually written in the last month. The next thing I’ll be releasing is a picture book written by my dad with illustrations by my mum which I’ll be publishing before the end of January. The book is a collection of sayings in line with non-dualism philosophy. It’s (tentatively) called “The Sayings of Potato Mashi”. He’s a self-realized, non- dualist potato, it’s pretty darn cool haha. The sayings are great and so are the pictures so hopefully it will do well. After that I have two more books in mind that I’d like to write this year before heading to the South of France late in 2013, the first on sex and sexuality and the other on music production.

Maryanne: Thanks so much for taking the time to do this interview. Lots of luck to you!

Rohan: Thanks for the interview Maryanne, I’m really glad you enjoyed the book! All the best.

For more information on Rohan, check out the following (especially the music, which I really love!)

9 comments on “Interview, Rohan Healy, Author: “The 7 Things That Made Me Genuinely & Irreversibly Happy””