My husband and I saw this amazing band so many times and they are absolutely amazing. “Almost Queen” is an appropriate name, as they truly nail every song — and I should know, I’ve been a diehard Queen fan since I was 12 years old — back in 1976!

Sadly, this show was one of the shorter sets. I’m such a Queen fan, I could listen to them perform all night. It’s always great to hear songs from my teenage years that I loved so much and listened to every song, in order that they recorded on all the albums, memorized all the lyrics, all the music, and who wrote which song.

This was a great “warm-up” for next month, when I see the real Queen again at the IZOD. I saw the original Queen with Freddie Mercury in 1982, Queen with Paul Rodgers in 2005 and now I’ll be seeing them with Adam Lambert.

If you never get to see the real Queen, I guarantee Almost Queen is a super replica. Joseph Russo never breaks out of character as Freddie, though doesn’t try to BE Freddie, but rather keeping his legend alive.

Randy Gregg is awesome as John Deacon and he’s great with the crowd. As a side note, he plays with another favorite 1970s band of mine — Angel (who I hope to see someday!)

John Cappadonna is fabulous as Roger Taylor. He even has a gong behind the drums! Very authentic!

Steve Leonard is phenomenal as Brian May, a guitar genius.

After the show, I got to have my picture taken with Joseph Russo and John Cappadonna. Thanks guys! 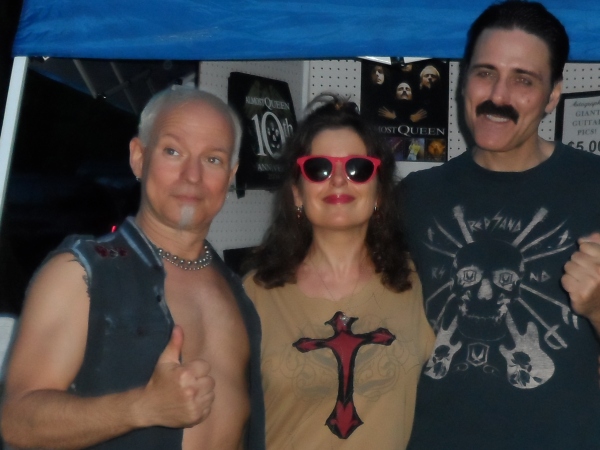 John Cappadonna, Me and Joseph Russo 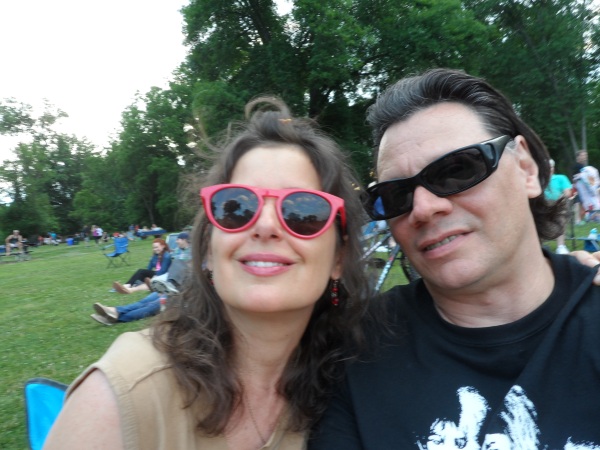 Me and my husband enjoying the show

I’ve been eating a vegetarian version of paleo for about two weeks now. I can’t do enough to rave about this lifestyle. It’s easier than raw. I feel full and satisfied. My blood sugar doesn’t drop and best of all, I can eat all I want without gaining weight (note, I do work out every day, 10 to 40 minutes). But what really amazes me about eating this way is how super soft my face is!

Here’s a WOW! recipe I found in a paleo magazine … it was so delicious it blew me away! I will make this salad every day until I get sick of it, it was perfect and has everything you need: healthy protein, healthy fats, greens, etc.

It serves four, but if you have a fast metabolism like I do, you can definitely polish off all four servings in one sitting.

Ingredients (I used all organic)

Sea salt and black pepper to taste (which I didn’t even use because it was sooooo delicious and flavorful without!)

Combine the kale, carrots, onion and sunflower seeds in a large bowl.

Scoop the avocado flesh into a blender or food processor. Add the coconut milk, water, lemon juice, honey, vinegar, olive oil, mustard and garlic powder. Blend until creamy and smooth. Pour the dressing over the salad and toss to coat. Season with salt and pepper before serving.

Had a nice turn out at the Caldwell Library, Caldwell, New Jersey, last night and some lovely comments:

1. That I had a nice reading voice and I should record my book on audio for the blind.

2. That it was refreshing and rare that my book was so positive, that I had no anger or bitterness like many other memoirs.

It was super cool meeting the library director, Fran, who I’ve been talking to on the phone for some time. A kindred spirit who loves music and went to the Mudd Club!

To purchase my book, “On the Guest List: Adventures of a Music Journalist” go here: http://www.amazon.com/gp/product/162903908X

Last night my husband and I saw the movie “Jersey Boys” which was really great! And of course, being a Jersey Girl, I loved all the New Jersey references.

And, super cool, that one of the actors in the movie, early on, I interviewed a few years ago! If you’re a Sopranos fan, you’ll know who I’m talking about, check it out: https://maryannemistretta.wordpress.com/2012/07/14/a-sauce-to-die-for/

My husband and I got to see Frankie Valli perform a few years ago in Newark.

Here’s some of my favorite songs over the years:

Me (blue dress) and Jennifer (far left) and new friends!

A small, but awesome, turn out at Milford Library last night for the “Guest List” reading. We all talked about Lou Christie, Divine, WNEW-AM, Glen Jones Radio Show, The Ramones, Stiv Bators, and of course, The Plasmatics and more!

Milford = another gorgeous New Jersey town I fell in love with. A place I’d love to move with my husband before others discover it’s greatness.

Thanks sooooo much to Jennifer for having me here! “On the Guest List” now has a home in Milford Library!

To purchase “On the Guest List: Adventures of a Music Journalist” visit Amazon: http://www.amazon.com/gp/product/162903908X

They say a cat can make up to 100 different sounds. While my late Billy Cat was basically silent all his life for the most part, Derick has taken full advantage of using those 100 different sounds over the years. The newest one is “oomph.” I would have never in a million years thought a cat could say “oomph.” He also imitates the mourning dove outside doing these little coos. And has sung on key with The Carpenters, doing the “ahhhh” while “Close to You” played. 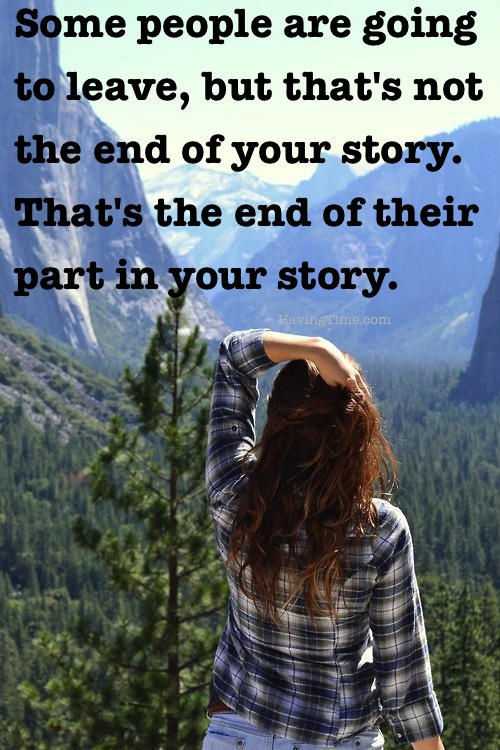 I only use the term “ass kisser” when it comes to business and people are fake to get ahead. Something I don’t do and never did.

When it comes to being nice to people you don’t particularly like, it’s not necessarily being phoney or ass kissing, it’s “faking it till you make it” — in trying to make the world a better place to live and trying to get uptight people to lighten up and trying to see some good with hopes that they can latch on to what you’re doing, see that you’re not the enemy and be nicer to you. Nothing wrong with being happy, as I love to live my life in a euphoric dreamlike state as much as possible surrounded by nothing but the BEST people, in love, work and play.

Though some people are so nasty/jealous, no matter how nice you are to them, things will never get better and the best you can do in that situation is just avoid them as much as possible.

Last night, though, I was thinking of something else. Usually when people are nasty/jealous/mean, they don’t live very long. Because negativity contributes to bad health.

So when these bullies die and you outlive them … hate to say it, but let’s be real … you’ll be like, “Well, I’m glad she’s dead because now she won’t be able to be mean to me anymore.”

If this sounds like you — think about it. Is that they way you want to be remembered? As someone people are glad is dead?! Not me. When I die, I want people to MOURN!  And I know they will because I’m not the person throwing digs and being mean and making people feel left out and ignored. I’m the person who will cheer you on, be your friend, support your career and buy your books, music, art!

I can wake up each morning, look in the mirror and say, “I love me, let’s get this day rockin!” And that, my friend, is true success in life! ❤

Money is fun and fantastic!

Though when used by a bragger as a cover-up to mask insecurities, as a sense of entitlement, and/or to give a false impression of being “better” than others, it’s a pitiful and boring perversion.

I’m honored that Ashley invited me to read from my book “On the Guest List: Adventures of a Music Journalist” which features stories about the late Wendy O. Williams of The Plasmatics who was a vegetarian and Joan Jett, an animal rights activist.

I’ve been a vegetarian since 1986 and shopping cruelty free since 1996.

It was an amazing event with a lot of great music! My favorite original band of the evening was New Politicians, who resembled Interpol.

I sold copies of “On the Guest List” after my reading and donated portions of proceeds to ASPCA. 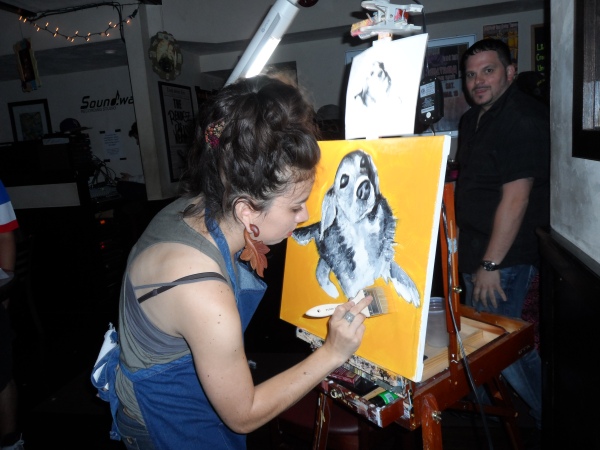 I love my supportive husband!

Thanks to this beautiful lady for buying two copies of “Guest List”!

A perfect night of mixing fun and pleasure — all for a good cause!

To donate to ASPCA visit: http://www.aspca.org/

To purchase copies of “On the Guest List Adventures of a Music Journalist” visit: http://www.amazon.com/gp/product/162903908X

Me, center, with Diane and Gerard Barros

Today was an absolutely PERFECT day to be out selling copies of my book “On the Guest List: Adventures of a Music Journalist” at a Montclair Street Fair.

SUPER SPECIAL THANKS to Robert Greco of Atelier Couture (http://atelier516.blogspot.com/) for letting me share a table with photographer/author/poet Robert P. Langdon (http://robertplangdon.blogspot.com/). I had a blast guys! All your friends were great too!

My Pear Tree (http://www.peartreeenterprises.com/) clients Diane and Gerard Barros  (http://barrosmelody.com/) for coming out to support.

To my friends Diane and Mike McGowan — it’s always a pleasure to see them! (And if you have a copy of Guest List, Diane is in a few of my adventures!)

And to Neal Cavallo of Ladida, which has supported local artists, poets, musicians, etc. for a couple decades now. If it wasn’t for Neal’s Ladida shows, where I performed my poetry and spoken word, in the early 1990s, I would have never had the confidence to pursue a writing career! It was so great seeing Neal for the first time since the early 1990s! 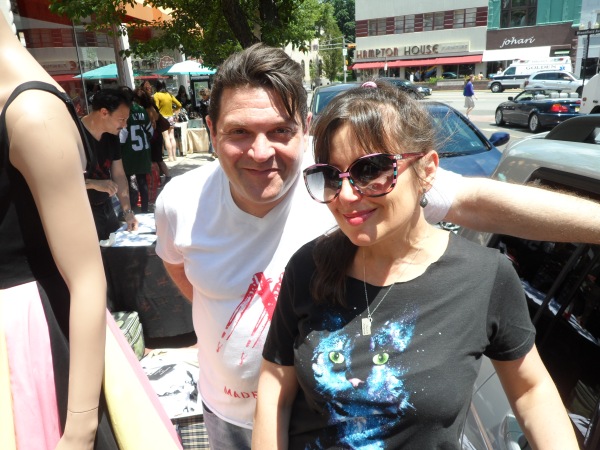 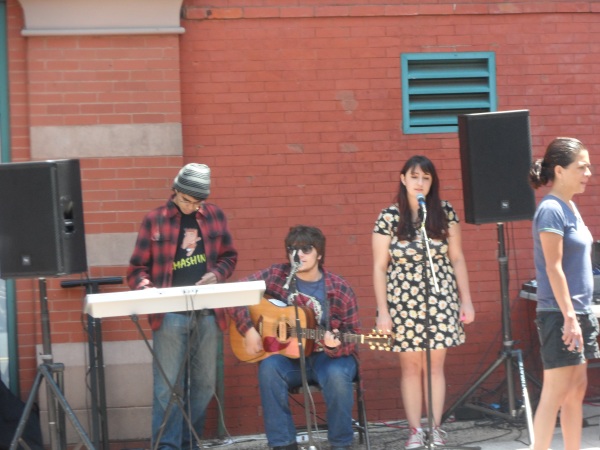 The band pictured above was AMAZING!!! The best band of all three that played. They did originals and a super cover of a Smiths song. Unfortunately I did not get their name, as they were playing across the street from where I was selling. If anyone out there knows who this band is, please come forward and tell me their name!

A Ladida reunion with Neal Cavallo! 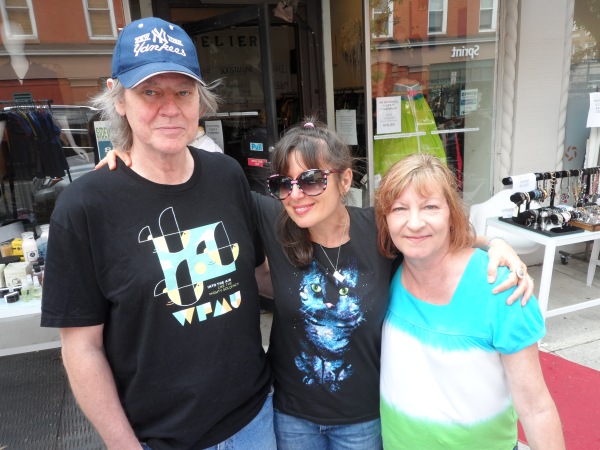 With Mike and Diane McGowan, two of my favorite people!

If anyone is interested in purchasing “On the Guest List: Adventures of a Music Journalist” visit http://www.amazon.com/gp/product/162903908X