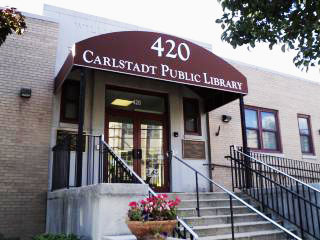 Last night I presented my lecture: “Italian American Food, Family and Community” at the Carlstadt Public Library and I had a blast! Website: http://carlstadt.bccls.org/

About 40 people showed up — and one was artist Andrea Mistretta: http://www.mardigrasgraphics.com/

I was thrilled when she gave me two of her prints! I never met her before and it was an awesome surprise.

This presentation was poignant as I had a few other firsts. Another lady said I moved her to tears, reminding her of things she hadn’t thought about in a long time. Then a male patron called his friend on the phone and said, “Come see this!” And she showed up!

Rebecca, the adult program coordinator, was a perfect host! And I’ll probably be back next year! I drove home, almost in tears because I was so happy. What a great group and what a great library!

Here is the synopsis for my program:

Between 1820 and 2004, about 5.5 million Italians immigrated to the United States. Italian women who arrived during the massive immigration period had to quickly adapt to new and unfamiliar social and economic conditions. Learn how, during that time frame, Italian women placed highest priority on family, remaining strong while adapting to new circumstances and used their home-based economic skills in order to avoid factory work.

Also discover how in the second half of the 20th century Italian American women excelled in practically all fields such as politics, television, health and more. And how today, even though many Italian Americans have inter-married within other ethnic groups, they kept a sense of their culture including Italian food, drink, art, and above all, family commitment – all of which has made its way into American culture.

For more information on other lectures I have available for libraries, rotary clubs, senior clubs — and yes, Italian clubs, please visit: www.peartreeenterprises.com

One comment on ““Italian American Food, Family and Community” at Carlstadt Public Library”