Winter is on it’s way and now is a great time to start prepping. You can make your skin super soft with this wonderful recipe.

Base of one cup coconut oil

Rub in circular motions all over your skin. Shower.

You’ll feel super fresh, clean, and your skin will be its softest ever!

Maryanne Christiano-Mistretta is a writer and public speaker. She gives many lectures on health in libraries throughout New Jersey. She is also a Young Living distributor. Contact Maryanne at: maryannechristiano@gmail.com

Yesterday I was so touched to join two beautiful souls together — Ashley and Mitchell.

Officiating weddings is not something I do, but Ashley had asked me to, so I got my certificate. Ashley and I have been friends about two years and she is like a sister to me.

And this is the story of how I came to be the officiant at their most beautiful day.

The precious thing about life is that you’ll never know what a new day can bring. Pure magic can happen in a split second. Two years ago I was doing one of my first book signings ever. Ashley and Mitchell were there, in the audience. I did not yet know them. And it was one of their first dates.

While I was reading, from my own memoir, with my own love story, I noticed Ashley looking wide-eyed and attentive. We spoke after the reading and found out we had a lot in common, even though I was 26-years-older than her! We both loved the music of HIM, poetry, reading, and animals. We remained friends and saw each other from time to time.

It was earlier this summer that I received a call from Ashley, asking if I’d officiate her wedding. I was honored.

Between the rehearsal dinner on Friday night, and the actual wedding day, I can honestly say I have never seen so much love! Ashley and Mitchell both have the greatest family and the greatest friends. My husband and I had the time of our life! From start to finish, it was incredible. Hearing music by HIM, David Bowie, and The Cure. The gothic theme, with pumpkins along the aisle, Edgar Allen Poe and ravens set up at the reception area. The DJ and two percussionists that had the party going full hilt. And the food, especially the chocolate mousse dessert. It was the first time I had sugar in months!

It was certainly a day and night I’ll never forget. Wow. Just wow! ❤

All the happiness to Ashley and Mitchell as their FOREVER has just begun!

Maryanne (left) with Ashley — I love this girl!! 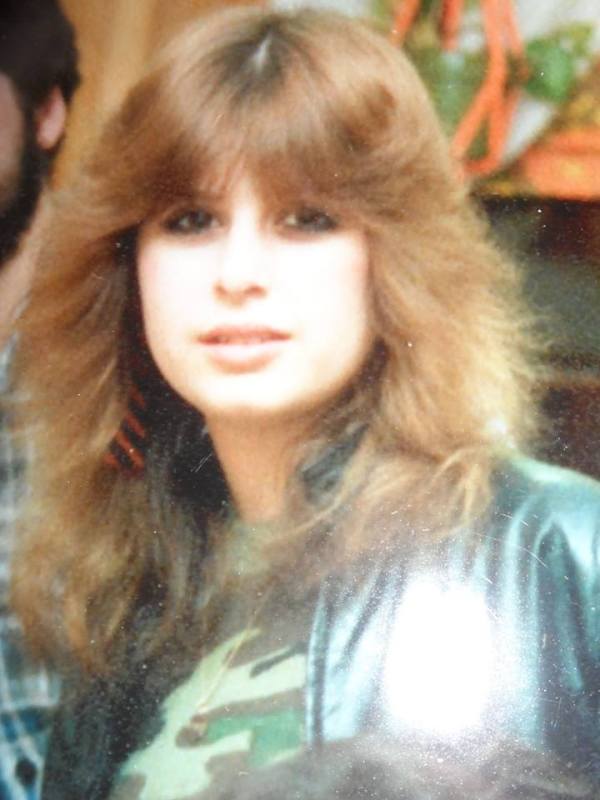 1980 was a great time to be alive — and young! So much great music was exploding on the scene. In fact, so much that I’m still catching up on the more obscure stuff.

At 16 I was really into The Clash. I was lucky to see them at The Capitol Theatre, in Passaic, NJ. The earrings I’m wearing in this picture I scored at Trash & Vaudeville in NYC.

The end of 1981, I was still loving punk rock. Now I had my hair bleached blonde in honor of the blonde beauties of the day like Debbie Harry and Nancy Spungeon.

In 1982 I was trying for the new romantic look, though I never quite nailed it.

1985, me to the right … Hair is getting bigger in The Bahamas 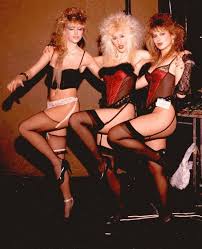 The above shot was taken at a nightclub in NYC. I was part of the stage show for 1980s glam rock legends Pharoah.

1987, at a NYC nightclub … I just had to introduce myself to the legendary Tiny Tim! 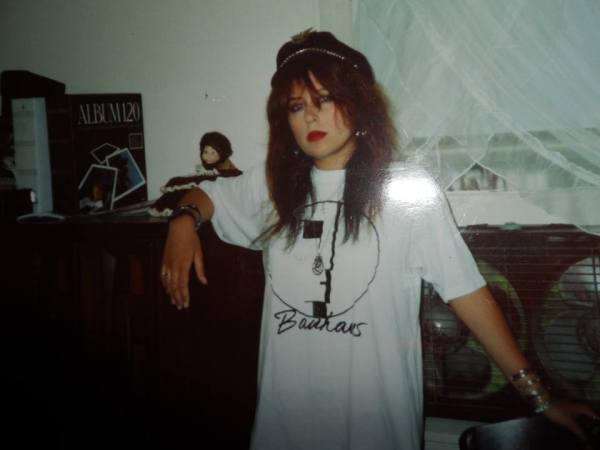 1989 and so begins my gothic years 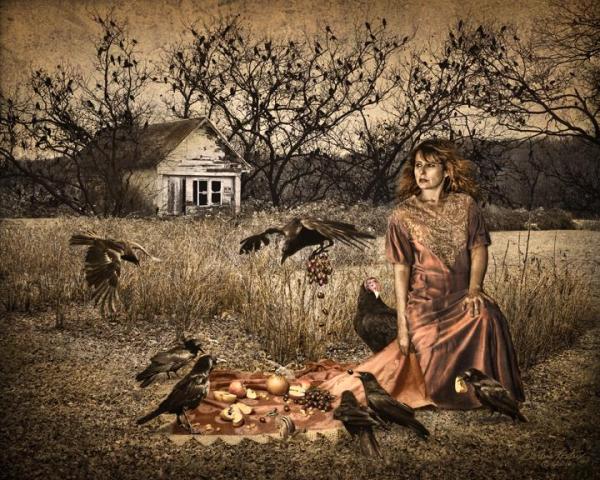 The Picnic, Photograph by Darlene Foster

I’ve shared, several times on this blog photographs by Darlene Foster (http://www.darlenefoster.com/) that I’ve modeled for. October 2010, we spent the day together taking a series of photographs during an 8-hour period, with a long break for lunch. An interesting side note is that prior to the modeling session I got into a minor car accident. I was still able to drive to Darlene’s home, but during the session I was seeing stars. After the session I went for acupuncture treatments for several weeks.

Nevertheless, we made some great art together.

The Picnic was Darlene’s latest creation and it sold yesterday at The River Queen Artisans Gallery in Lambertville! 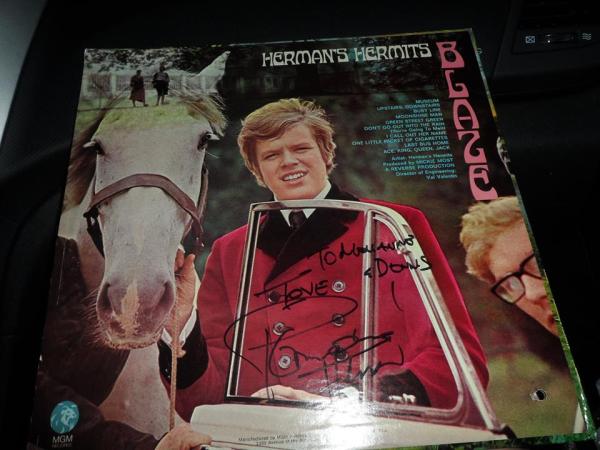 Peter Noone autographed album to me and my husband

A super fabulous show was put on last night at PNC Bank Arts Center in Holmdel, New Jersey. (Note, while I love the shows that are put on at this venue, I am truly disgusted with PNC Bank Arts Center. The workers there behave like ex-cons pushing their weight around and yelling at people, telling them not to dance. Hello!!!!! This was an “oldies” show and most of the people there were seniors; this was not a Marilyn Manson concert — no need for the over-obsessive “security”!! Imagine such behavior from so-called professionals. And at the end of the show, I was innocently waiting at a table in the concession area while my husband was in the bathroom. All the lights were still on, which meant that it was still OPEN. One ugly bitch who worked there told me that I had to LEAVE. She was completely out of line! Even my husband, who is the most mellow person on the planet was pissed about her attitude towards me. SHAME ON PNC BANK ARTS CENTER!)

But, back to the show, hosted by radio DJ favorite, Cousin Brucie, who always does a great job as emcee to these shows each year. The Cousin Brucie theme song was done by The Four Seasons and was played during Cousin Brucie’s time onstage.

First up was Gary Lewis and the Playboys! Gary Lewis is the son of comedian Jerry Lewis, who is now 90-years-old. The band was excellent. They did their hits, plus hits from other artists of the 1960s. Interesting side note “This Diamond Ring” was co-written by the late Irwin Levine who was a NJ resident.

Gary Lewis is 70-years-old and looked incredible. He was very high-energy, as was the rest of the band.

Lewis opened up with Freddie “Boom Boom” Cannon’s “Palisades Park” and did such a great job, he seemed to own it.

It was one great hit after another and my absolute favorite song was “Green Grass.”

Next up was Herman’s Hermits starring Peter Noone. This was the third time I saw Peter Noone perform and the best of all! Noone was incredibly entertaining doing a comedy routine in-between songs, imitating Mick Jagger and Johnny Cash (which was incredible). He also joked a lot about New Jersey.  It’s wild that he knows our area so well, making jokes about Sussex County, the Newark Airport, Hackensack and so on. He had the audience in stitches.

My favorite songs of the set were “Mrs. Brown You’ve Got a Lovely Daughter” and “There’s a Kind of Hush.”

Peter Noone still sounded like a teenager — and ran around the stadium like a teenager, shaking hands with fans. I shook his hand twice during the show and once afterwards when my husband and I met him after the show. We scored the “Blaze” album which Noone autographed for us.

It was an honor meeting an artist I listened to when I was a little girl — “Mrs. Brown You’ve Got a Lovely Daughter” on a 45-RPM record. In the early 1970s I was only 9-years-old and had a much younger cousin who was wise beyond her years. She said that song was “sad.” I never thought of it as being sad at the time, I just loved the melody. Then last night, listening as an older woman, it choked me up a bit — yes, it is a beautiful, sad song. ❤

Maryanne Christiano-Mistretta is the author of “On the Guest List: Adventures of a Music Journalist” available in paperback only on Amazon: https://www.amazon.com/Guest-List-Adventures-Music-Journalist/dp/162903908X