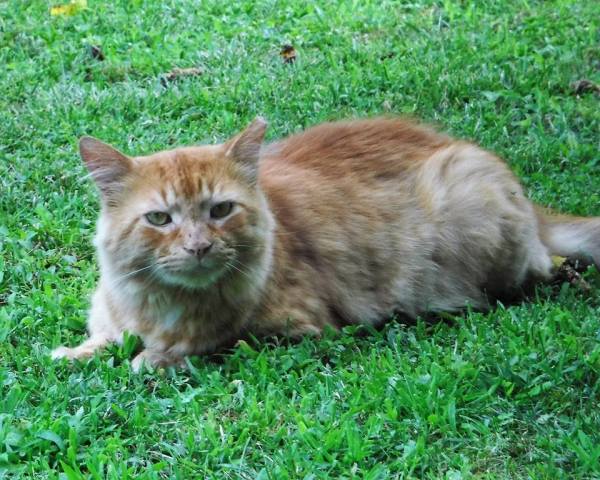 Earlier today we had to put down our sweet Bennie cat.

He was a feral who started showing up at our doorstep last August. My husband and I fed him. He was enticed by the food, but more so, the pets we’d give him. It seemed he was more starved for love than for food! He’d take a few bites, but then put his head up to be pet. Of course we fell in love.

One day he wasn’t around. I called, “Bennie!” He knew his name and ran through the grass like a gazelle! He had such a personality.

Before we took him in, we got him checked out by a vet and learned he had FIV, a feline auto-immune disorder. We wanted him anyway. We knew with FIV, he’d come with health problems, but we didn’t realize it would be so soon. He was only 3-years-old.

When he was officially inside, he loved it! He did this cute thing we called “Happy Paws.” He’d purr very loud and wiggle his paws. Sometimes he’d lie on his back with his happy paws up in the air. And he was so cute when he cocked his head to the side, like a puppy would do!

Bennie was a lazy cat. He loved to lay around and be pet constantly. He really liked butt rubs. And he loved music. I’m not a singer, but I’d sing to him and he’d stand up and look right at me, as if he was giving me a standing ovation! Even if I had a punk rock band, like The Dickies on the CD player, he’d sit right in front of the speaker and listen.

We only had him five months. He had brain cancer. And he was a little fighter too. He was determined to make a go of it, but unfortunately worse came to worse and the sad day had come. I collapsed in my husband’s arms. We were both devastated.

Our vet said Bennie knew he was sick and he came to us to give him a good home  before he passed. I know we did! And I’ll miss those purrs and that beautiful face.

“Until one has loved an animal, a part of one’s soul remains unawakened.” –Anatole France