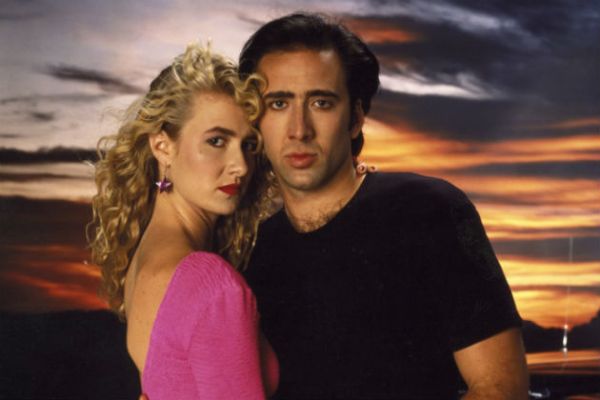 Although it’s officially spring and days are longer, it’s still cold here in New Jersey which means many a night spent in, snuggling with the hubby and kitty, watching movies.

It was my favorite movie when it came out in 1990 and I saw it in the theater at least four times and had the soundtrack.

It was a bizarre movie, but it spoke to me when I was in my mid-20s and here is why:

* A certain song on the soundtrack. The haunting “Wicked Game” by Chris Issak sends chills up your spine. A perfect song for the adventures of Sailor and Lula.

* The sex scenes and dialogue. This chemistry between Dern and Cage was electrifying! I later learned they were once an item, which makes total sense. They both looked their best ever in this film. This was before the world was over-saturated with fake breasts and shaved chests/heads. These were truly beautiful people. Dern with her messy, long curly blonde hair, naturally thin body, overdone red lips and perky breasts; and Cage with his messy, bad boy look and a bit-much chest hair — that is what made these people real, they were REAL!

For days afterwards I was repeating Sailor and Lula lines like, “Sailor, you look like my Daddy and you have a nose like him” and “Baby, that’s rockin’ good news!” And calling everyone: “Peanut.”

In my late 20s, early 30s, I did a lot of spoken word art in various clubs and coffee houses in both NYC and New Jersey. Inspired by “Wild at Heart” I wrote a poem called “My Daddy” and even quoted from “Wild at Heart,” followed by the line, “I stole that one from ‘Wild at Heart.'” It was my most requested poem by audience members and sometimes audience members would recite the words along with me.

* Special appearances by some of my favorites at that time: Crispin Glover, Willem DaFoe, Sherilyn Fenn and Isabella Rosellini. Can’t beat the roles they played.

* Elvis. When people don’t understand the coolness of Elvis, they just don’t get it.

Watching again, last night, for the first time since the 1990s, I noticed a slight comparison to Richard Kern’s “Fingered” in the attitude of the characters. Though I’m no film critic or expert, I can just predict the friends I have who read my blog will be sending me emails telling me, “Yeah, you’re right.”

Kern never reached the commercial success Lynch did, but I can’t help but wonder if he had inspired Lynch at one point or if it’s purely coincidental.

After watching “Wild at Heart” again, I was reminded how much the Lula character reminded me of my younger self: the leather jacket, the red lipstick, the messy hair, the sexy clothes, the over the top personality, and even the candy necklace. I wore them all the time on my wrists, long before Courtney Love did.

The movie represented freedom to me. At the time, I didn’t even think of the danger element. I also didn’t even realize, at the time, how much sex was in that movie. I was more about the two good looking characters, madly in love, that dressed a lot like I did. Still single, I felt like if these crazy characters found each other, there was someone out there for me too.

I remember a club friend telling me I reminded him of Lula — and that was the highest compliment to me, at the time.

My version of “Lula”