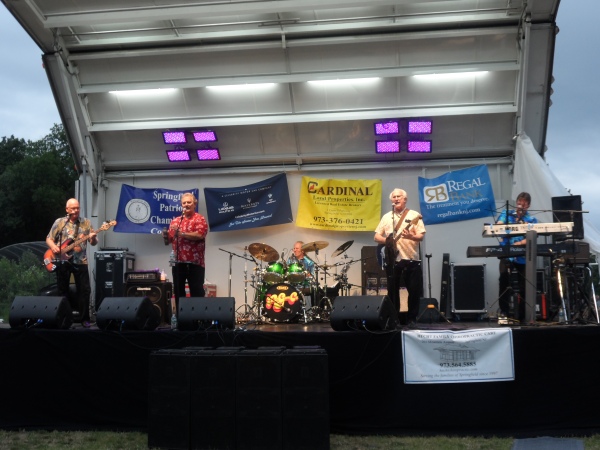 For nine years, every July 4th my husband Dennis and I loved going to see The 1910 Fruitgum Company at a park in Springfield, New Jersey, and this was the first year it got rained out after only a few songs!

From the get-go it didn’t look too good in the sky and for some reason the band started a half hour later than they were supposed to. (We actually got there early thinking maybe they’d start the show early because of the rain).

The band only got to do a few songs including their hits “Goody Good Gumdrops” and “Indian Giver” before the rain started. Original member Frank Jeckell jokingly put a towel over his head.

While the 1910 Fruitgum Company played in the rain, my husband noticed the legendary Ron Dante (of The Archies) standing by the side of the stage. We walked over to meet him. He was awesome! He signed one of my husband’s CDs and took a picture with me.

Ron Dante and me

The rain was really coming down at this point, so he cut to the chase and did his biggest hit “Sugar Sugar.”

At least I got to dance to part of the legendary song before the sound guy pulled the plug.

My husband and I came home soaking wet, but we had FUN!

Oh, is that fireworks I hear — or thunder?