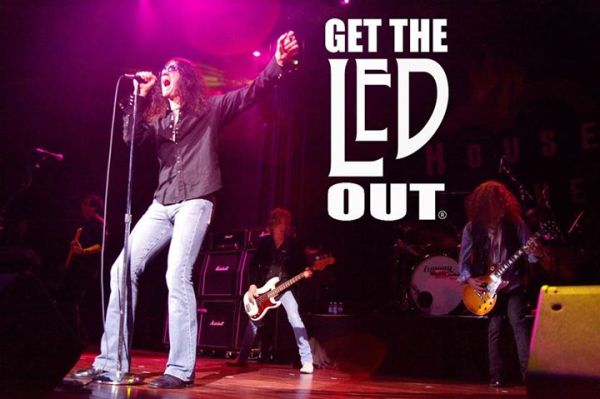 (Photo from Get the Led Out Face Book page)

Get the Led Out at SOPAC (South Orange Performing Arts Center) last night was phenomenal!

The theater only seats about 400 people, and thanks to Billy Childs (bass) for the comp tickets, about seventh row!

This is the article I wrote when I interviewed Billy Childs earlier this month: http://thealternativepress.com/articles/get-the-led-out-will-perform-at-sopac-june-21

Get the Led Out live was truly a mystical experience

and a perfect way to spend the summer solstice.

It never ceases to amaze me, when you see a GOOD live performance, how much better you enjoy and appreciate the music. Now these guys are obviously about THE MUSIC, not just being a cover band that imitates a live show. It took three guitarists to create the Jimmy page studio sound. There was a total of six people in the band, plus a female vocalist helping out on two songs. And the most surreal moment of all was then they performed my second favorite Led Zeppelin song, “Fool in the Rain,” towards the end when the part with the whistle blows, a man come on stage just to do the whistle part. The entire band was absolutely flawless and I honestly entered another dimension. I will never hear “Fool in the Rain” the same way again.

It was truly a mystical experience and a perfect way to spend the summer solstice!

Please check out their website to see the promo video (http://www.gtlorocks.com/). There is a lot on You Tube, but cell phone videos do not do this band justice. You can’t even imagine how GOOD they are and I’m not even a Led Zep head, just someone who appreciates good music. And you can’t go wrong with a band that has such a massive catalog of work that so many other artists covered over the years.

They played over two hours. Opened up with “Immigrant Song” and blew me away from the get go. A little boy was sitting in front of us, he was getting into it 100 percent. You KNOW when someone is going to grow up and be a musician. It was adorable. The entire audience was a good crowd. It was an overall great vibe. No assholes there just because they had season’s passes (I hate that pretentious shit). True music fans, each and every one of them. Get the Led Out got several standing ovations throughout the evening. And not once did I see anyone texting during the show. Get the Led Out had the audience’s undivided attention! And trust me, I go to a ton of shows and this was a rarity.

Other favorites included, “Kasmir” and “Whole Lotta Love.” I loved the drum solo too. They did so much and the two hours zipped by. I couldn’t believe it was over.

After the show Dennis and I chatted with Billy Childs for about 20 minutes. I asked him what I forgot to ask him during my phone interview, if he liked the work that John Paul Jones did with Diamanda Galas. He laughed and said, “No.” We all talked about music a lot, as Dennis and Billy both recorded in the same studio in the 1980s when Dennis was with Pharoah and Billy was with Britny Fox. 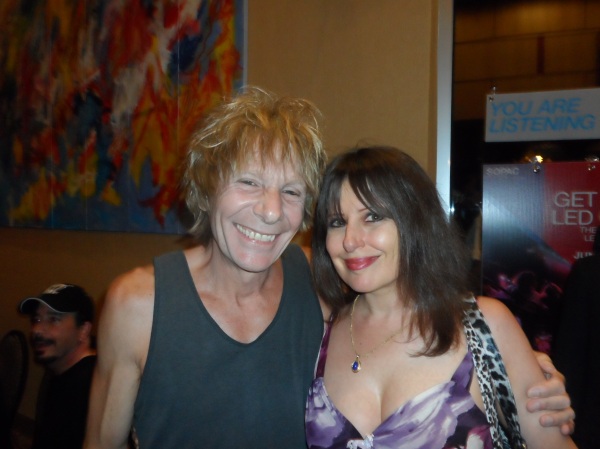 Billy Childs, bassist Get the Led Out and Britny Fox

Outside the theater, by sundial

Two days ago I had a blast interviewing Billy Childs for an upcoming Get the Led Out show at SOPAC in South Orange. We talked for 1.5 hours — the longest phone interview I ever did in my career!

Interesting side note, Billy Childs recorded at House of Music in West Orange, New Jersey, with Britny Fox around the same time as my husband’s ’80s hair band Pharoah recorded there.

Their website, which you can find via my article has some cool videos so you can see them performing. They truly are an amazing band. I look forward to the show later this month!