In my social distancing circle

Throughout these Covid times, I’ve been speaking of the positive things in life–the things that matter. We do our best to stay safe; and keep others safe. But we must have a balance in order to keep our mental health too. Going out, experiencing live music, smiling at strangers, and bonding over music is key to good health. Singing along, moving with the music, makes you feel alive! And feeling good is the greatest anti-oxidant. I look forward to seeing more outdoor concerts this summer. (Just like last summer; which makes life seem closer to normal!)

Her fiction book “Love Cats” second printing is now available, under the pen name Krystianna Mercury, from Pink Flamingo. You can purchase it here: Love Cats

Tusk is my favorite cover band because each individual musician has greatness to offer.

Kathy Philips IS Stevie Nicks. She has the vocals down pat and never breaks character. Her costume is made beautifully: black suede boots, sequined black shawl and Nicks’ trademark top hat. She whirls and twirls and shakes her tambourine throughout the night, never missing a beat. (Note: Last summer I saw them perform outdoors during a full moon — it was enchanting to see a recreation of Stevie Nicks doing “Rhiannon” with a full moon as backdrop!)

Scott McDonald on guitar is amazing. I’ve seen this band perform several times and thanks to him magically  recreating the work of Lindsay Buckingham, I am now a big Lindsay Buckingham fan and have several CDs. I have to say, he’s my favorite band member.

Kim Williams on keys and vocals has the prettiest voice. I said to my husband last night, she plays as she sings, soft, pretty and delicately. She’s so cute and stylish too — great hair, bell bottoms, platforms and a halter top. Don’t know if that’s her real style or doing the ’70s thing for the show, but it works!

Randy Artiglere on bass was mind-blowing. I’ve always been a “bass girl” and he certainly delivered.

And for the greatest drum solo from a cover band, Tom Nelson, who added all the drum solo cliches from popular bands such as U2 and The Rolling Stones, then got up and started drumming on the pillars and door along side the outdoor theater. It was crazy, fun!

They leave no stone unturned when it comes to the library of Fleetwood Mac songs. You’ll hear all of them. My favorites are: “World Turning”; “Say You Love Me”; “Gypsy”; “Edge of 17”; “Gold Dust Woman” (which is total perfection, thank you Ms. Kathy Philips!); “Go Your Own Way” and best of all “Second Hand News.”

Interesting, this is probably the fifth time I saw Tusk over the past three years and every time they begin “Rhiannon” I’m thinking it’s “Oh Daddy” — but since they are doing the LIVE version of “Rhiannon” it throws me off. I’d love to see them do “Oh Daddy” someday. 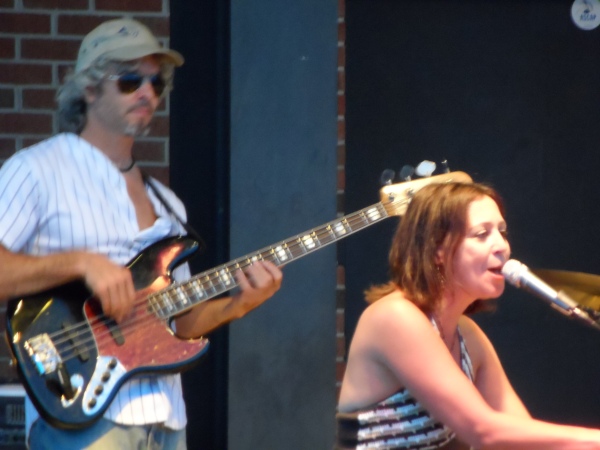 NOTE: If anyone wants to swipe these photos, I have no problem with that — just be polite and credit: Photos courtesy of Maryanne Christiano-Mistretta.