Today was the last of my “Luck of the Irish” presentations until next year. This year was extra special as I had guest vocalist Carol Erickson sing a few Irish songs following my presentation. I’m thrilled to share that the Hudson View Care and Rehab Center (http://hudsonview.org/) gave both of us standing ovations!

Carol and I are available for assisted living facilities, libraries, Jewish Community Centers, senior groups and rotary clubs. In addition to “Luck of the Irish,” I’ve recently added Carol as a guest vocalist for my presentations: “History of Valentine’s Day,” “History of Motown,” “History of Santa Claus,” and “Holidays Around the World.”

For more information on my presentations, please visit my website at: www.peartreeenterprises.com

For pricing and availability, please contact Maryanne at: 908-276-1514 or maryannechristiano@gmail.com

Me having fun before one of my lectures!

I’m pleased to say I’ve had my business Pear Tree Enterprises (www.peartreeenterprises.com) since 2008. I’ve helped many people edit their books and help them get published and I’ve published my own book too earlier this year. I also present many lectures in libraries and assisted living facilities and other odd jobs. Occasionally I enjoy working as an extra too.

Thanks so much to Ridgewood Library for having me last night, as I presented “Trends of the 1970s.”

For a list of all my lectures available for libraries, assisted living facilities, senior groups, etc., visit my website: (www.peartreeenterprises.com). 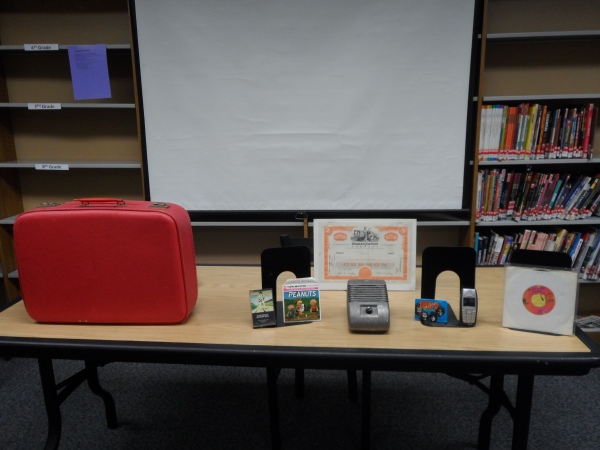 Does any of this stuff look familiar?

Here you have it! My grandmother’s suitcase from the 1960s, that I still use! (Hey, it’s easy to spot on the airline conveyor belt. Do you want to hang out in an airport all night? I don’t!); cassettes, view master, Howard Johnsons bond, speaker from Drive-in, KISS bubble gum cards, my first cell phone from 2001, and 45 rpm with spindle

My “Going, Going, Gone: What the Next Generation Won’t Remember” was a hit last night! Thanks so much to Sayreville Library for having me! I had people in the audience as young as 8 and as old as 72!

Rates are reasonable. All lectures are fun, upbeat and audience inter-active!

Last night I presented: “Newsies: A History of the Newspaper Industry” at Cranford Community Center, sponsored by The Friends of the Cranford Library.

Due to the super hot weather, I didn’t think anyone would come, but what a fun surprise to speak to a full house! Some of the ladies who came to see me were repeat customers who saw me do a book reading/signing for “On the Guest List.” It’s awesome to see people coming to hear you speak for the second time around!

If so, here’s a little synopsis (for rates and availability contact me at: maryannechristiano@gmail.com — I will travel anywhere in the USA).

Newsies: History of the Newspaper Industry

Take a trip back in time as Maryanne Christiano-Mistretta presents “Newsies: History of the Newspaper Industry.” The lecture will take the audience back to 59 B.C. when the first newspaper was published in ancient Rome.

Since the history of newspapers is so vast, Maryanne will focus on U.S. newspapers. The audience will learn about how the quality of newspaper reporting was perfected after the American Revolution and the Battle of Lexington; the Penny Press; “yellow” journalism, chains and syndicates, and how competition such as radio, television and internet caused a decline in the newspaper industry.

What makes this lecture so much fun is that there is audience interaction. Maryanne will ask listeners to join in and share their experiences with newspapers. For example: “What was your introduction to reading the newspaper?” and “Where you ever in the newspaper?”

Maryanne worked in the newspaper industry herself as a journalist during most of her adult life. She wrote for New York papers: The Westsider and the Chelsea Clinton News (which is named after an area of NYC, not the former president’s daughter).

Maryanne was also a journalist at The Montclair Times for seven years. After she left The Times, she went on to write for several online publications including The Paterson Press, where her feature articles also appeared in The Herald News.

She also wrote for The Aquarian Arts weekly, a newspaper that is in the Rock and Roll Hall of Fame.

Thanks to librarian director John Malar for having me!