My husband and I at a Duran Duran show — FREE!

I’ve been a music fan as soon as I knew what music was. Music was always playing in my house when I was a kid. And growing up, music was my priority in life. Mind you, I am not a musician; just a huge fan.

Concert going was always important to me. And even back in the day, growing up in an upper middle class family, tickets were overpriced. However, back then, you still had a fighting chance if you got to the mall early in the morning, you could score a front row seat for the regular ticket price before the scalpers got their grubby hands on them.

Then, things changed. You had no choice but to get tickets from scalpers. However, the most I paid to see a big name star, David Bowie, was $150 for 10th row center, during his Serious Moonlight Tour at Madison Square Garden in 1984.

David Bowie set the bar for me; he was worth it. And I subconsciously made a vow that I’d never pay more than $150 for a concert — over 30 years later, I stuck to it. The only other times I shelled out money close was $100 to see The Stones and $75 to see Prince.

Throughout the years, I’ve seen many big name concerts free because they were outdoors. OR, because, lucky, ambitious me, I was a journalist and was guest listed. And I have some friends in the music industry. And I married a musician. And I’m lucky. I’ve won tickets to see some great shows. And, last but not least, let’s not minimize the talent of our own friends who have made their way in the music industry on a smaller scale. Local talent should never be disregarded.

About 15 years ago I reconnected with a music loving friend I knew from high school. We went to many concerts together as teenagers; then a few as adults. She complimented me, saying that I was always up for a good time, and that I always had money to do things. She invited me to go to a concert with her that was well over $200. I declined. I couldn’t see the justification for paying that kind of money to see anyone when I’ve spent a lifetime of going to see music — GOOD MUSIC– for way less.

Here are some examples of great shows I’ve seen over the decades, for free, for winning, for being on the guest list (due to being a journalist or knowing someone), or for a real good deal. (Note: I’m not including concerts where people treated me as a gift).

Check it out….(note, all random off the top of my head, there are TONS more)

Probably more, but I can’t remember unless I go to my diaries.

(And don’t get me started on tickets I won but couldn’t attend for whatever reason, urgh! Still kicking myself for not going to see the late Hasil Adkins at Maxwell’s in Hoboken!)

Maybe I’m blessed, or just spoiled, but with so many great musical acts out there, and so many opportunities to see cheap or free shows, why should I shell out big bucks to ticket agencies? It’s definitely not necessary. Especially since, when you think about it, what goes up eventually must come down. Not to put anyone down–no way, I love these musicians way too much–but it’s just a great fact for us fans that in years to come, one of your favorites that was charging a ton of money in a large venue will perform for much less (or even free) in a smaller venue in years to come. Just a few years ago I saw Cher in a theatre in Maryland for under $40.

What was your favorite cheap or free concert? What was the most you ever spent on a concert? How do you justify it? 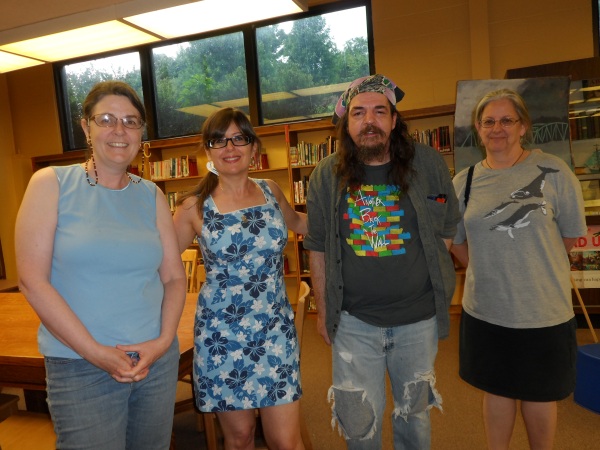 Me (blue dress) and Jennifer (far left) and new friends!

A small, but awesome, turn out at Milford Library last night for the “Guest List” reading. We all talked about Lou Christie, Divine, WNEW-AM, Glen Jones Radio Show, The Ramones, Stiv Bators, and of course, The Plasmatics and more!

Milford = another gorgeous New Jersey town I fell in love with. A place I’d love to move with my husband before others discover it’s greatness.

Thanks sooooo much to Jennifer for having me here! “On the Guest List” now has a home in Milford Library!

To purchase “On the Guest List: Adventures of a Music Journalist” visit Amazon: http://www.amazon.com/gp/product/162903908X

“On the Guest List” cover design by Darlene Foster

Well, the time has finally arrived! I found a publisher I am excited to be working with and “On the Guest List” will be released and sold on Amazon later this month (as a book only, I am not into Kindle, as to keep with the retro groove of the book and adventures in it!)

People are asking me about book release parties and author expos, etc. Not sure if that’s my scene as I view “On the Guest List” as more of a work of art, than a book, as it’s not coordinated by chapters, but by song titles. Some gave advice along the way, but I disregarded that and went with my heart. I am so happy I did so.

That said, I highly doubt I’ll be on the author’s circuit schmoozing and selling. “On the Guest List” is my precious muse and as Sid Vicious once said, “I did it my way.” And I will continue to do it “my way” thinking out of the box and coming up with ideas not to sell the most books, but to touch the most people who will connect with the book, no matter how big or small that circle is. Not to mention, there’s the whole anti-bullying angle, so I highly look forward to lecturing in schools and conventions about anti-bullying, as I do want to give back to the community as much as possible.

Like so many other generous people, I want to “save the world.” And if my book helps prevent JUST ONE bullied child from committing suicide, my work is done.

What I am thrilled about will be selling my books at Resintopia (http://www.resintopia.com/)  later this year, supporting my good friend Vin Bordogna who is the CEO and founder of the operation. When good people work together, nothing but good comes out of it — and that excites me to no end.

Enjoy the back cover pictured below.. This is the first time I posted it on this blog. Darlene Foster (http://www.darlenefoster.com/) went above and beyond the call of duty. And I’m honored beyond belief that I was able to score such positive endorsements from people whose work I’ve admired throughout my life!

Well, count down … it’s only a matter of weeks now!