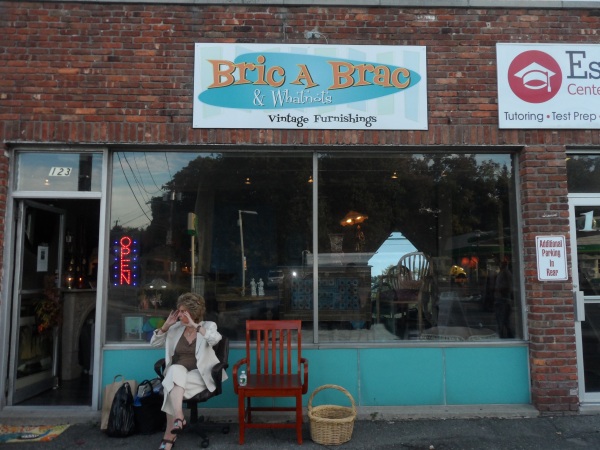 Outside of Bric a Brac

I was honored to do a book signing at Bric a Brac vintage store today, thanks so much to Vivienne Cesaro, and Nick Terregino along with his mother, Angela, his aunt, Rita Racaniello.

It was great meeting more new people and selling copies of my book, “On the Guest List: Adventures of a Music Journalist.” (Available on Amazon: http://www.amazon.com/gp/product/162903908X

For more information on Bric a Brac, visit their Face Book page at: https://www.facebook.com/Vintage1962 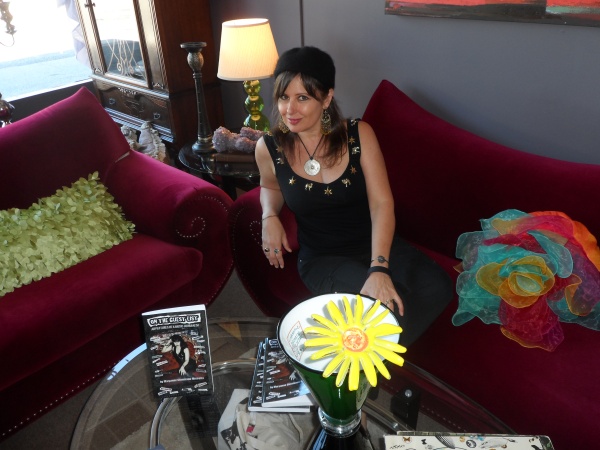 Author of “On the Guest List: Adventures of a Music Journalist” 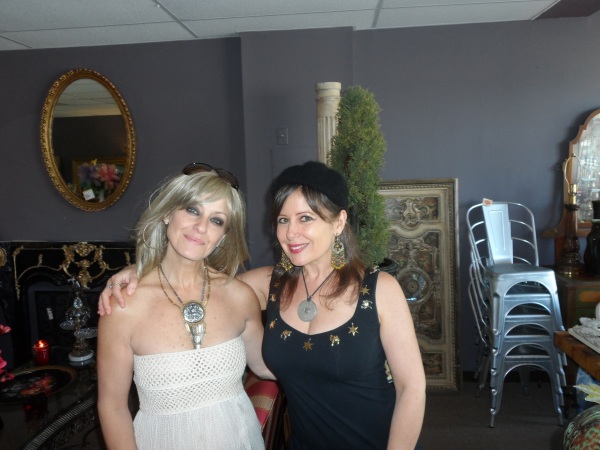 Vivienne Cesare and Me 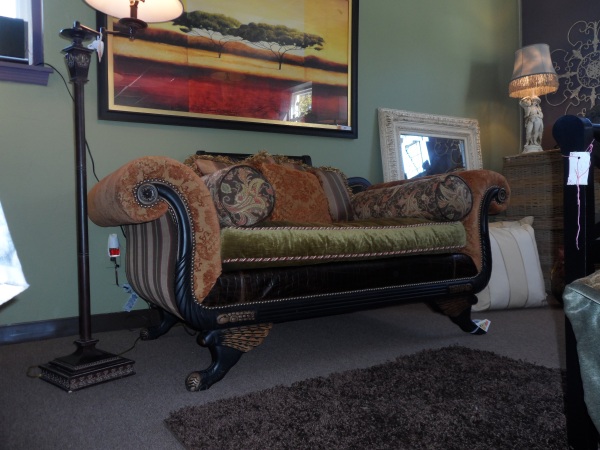 Some of the cool stuff! 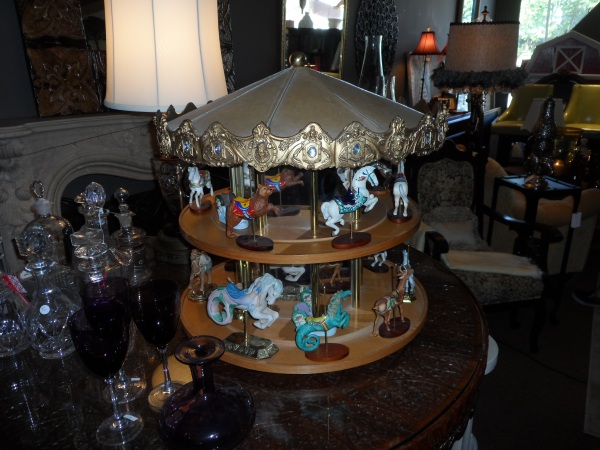 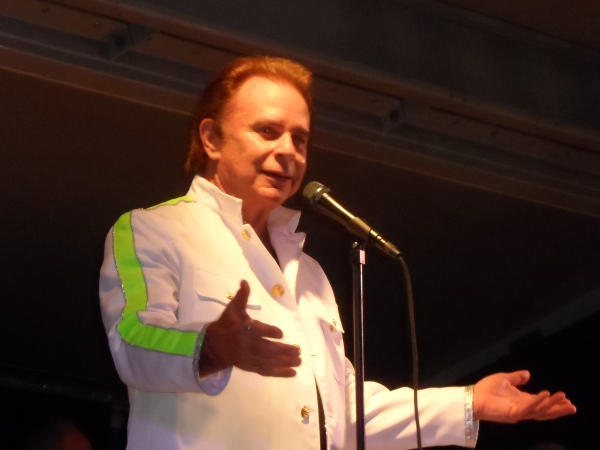 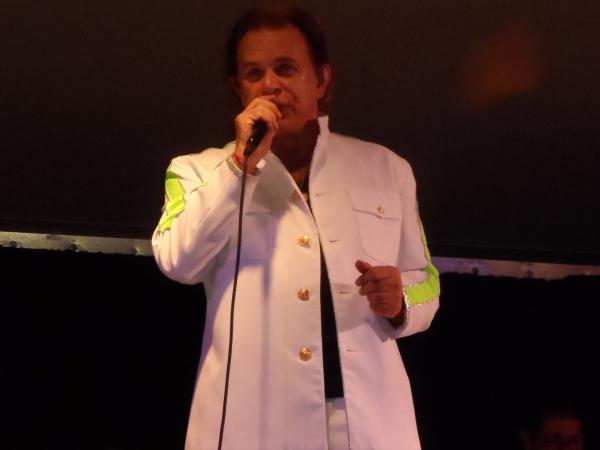 It was a most gorgeous summer night and for, I think the fifth time, my husband Dennis and I ventured out to see Lou Christie. But this show was extra special because it was more than an oldies tribute show with several acts — this time Lou was the major act. So we got to see him perform some songs we never heard him do live before like “Love is a Many Splendid Thing” and “Theme from a Summer Place.” It was really special. Plus, my husband and I were able to score a seat near the front. When Lou sang, “Never My Love,” Dennis and I got up to slow dance and had a moment — it felt like Lou was singing especially to us. 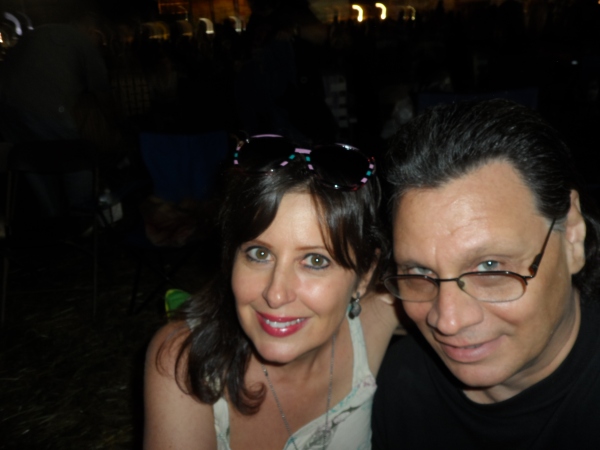 Me and Dennis enjoying the show!

Other songs included: “The Heart of Saturday Night,” “I’m Gonna Make You Mine” (my favorite), “Beyond the Blue Horizon,” “The Gypsy Cried,” “Two Faces Have I,” “Rhapsody in the Rain,” “Lightning Strikes,” and quite a few more.

The sound was a little off, but since I knew all the songs, it didn’t matter much. I just love the guy, he’s so fun and animated. And if anyone knows the name of the bass player — please come forward. He was from New Jersey and off the hook amazing!

Since this was a longer show, Lou introduced the band and all the members had their spot light to do their thing. That’s always a great part of any show, and again, how I favored the bassist! If the stage wasn’t so high we could have gotten better pictures, but I’m sure someone has.

Now, the coolest thing — after the Lou Christie show earlier this summer at PNC Bank Arts Center, I met a fantastic friend named Louise on a Lou Christie Face Book community page. Louise and I kept in touch over the summer and were looking forward to this show and meeting each other in person. Well, we did! She told me what she’d be wearing and I was able to spot her before the show! She told me she gave Lou a bottle of Italian wine and he acknowledged her from the stage! How cools is that? 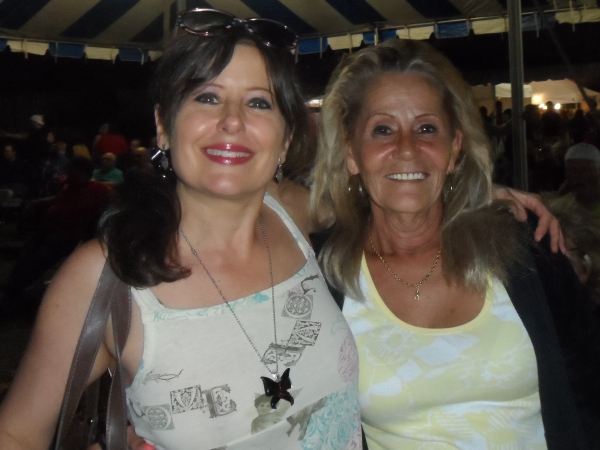 Me and fellow Lou fan and very good friend, Louise!

After the show, we all got to meet Lou Christie! I’m always dumbstruck if I meet a famous musician and it’s not in a professional setting (like when I used to work as a music journalist). I never know what to say. It was just so cute watching all the women swoon over Lou. They were all asking Dennis to take pictures with their cameras. And of course since it wasn’t Dennis’s camera he didn’t know how to use it. At one point, Lou said to Dennis, “Take the fucking picture” and we all laughed.

When I finally got up to Lou, I jokingly said, ‘Are you grouchy tonight?'”

I just love people that anything they say comes out funny. Lou is great that way! He also held my hand as I spoke with him, as if I was family. Lou truly cares about his fans, which always makes his shows a great time! God bless to a fellow Italian! 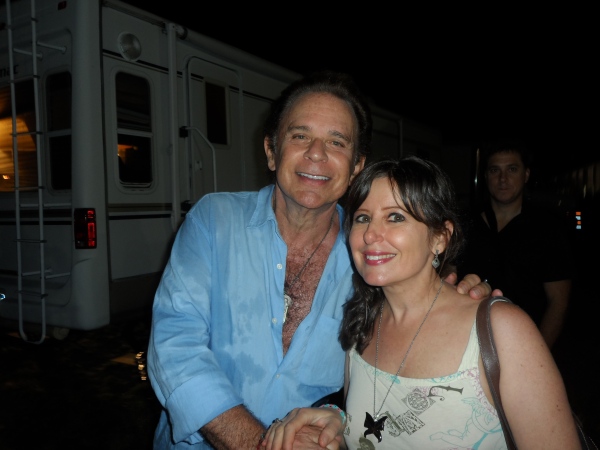 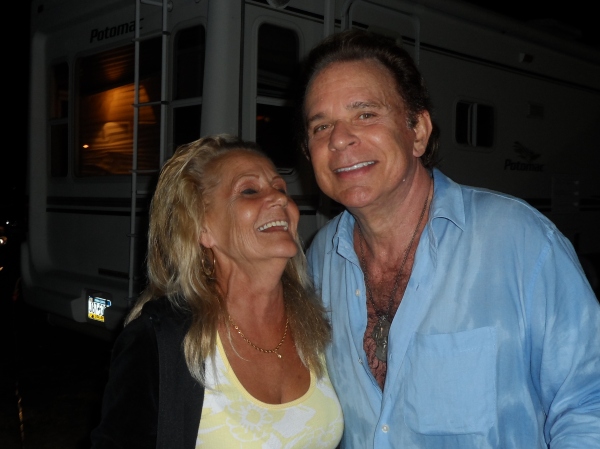 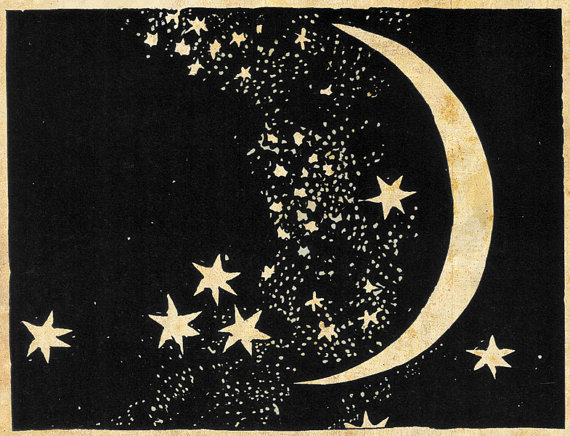 The other day someone said they felt they knew me because of social media. I had to laugh. This person hadn’t a clue.

Why, you may ask? Because what I share on the internet — articles I write, book and public speaking event promotions, concerts I go to, and an opinion here and there — is such a very small part of my life. I rarely discuss on the internet my life with my husband, or share pictures of our home and parties, speak of our/my future dreams, etc.

Though when I do share an opinion, yes, I admit, I let loose and put it all out there. That’s just my personality — honest. And because I’m on the shy side and more of a listener than a talker at parties, the internet is a great outlet for me to be heard.

But mind you, even when you think someone is “telling all” there is still so much you’ll never know, making even the most honest, revealing people A MYSTERY.

Think about it. Even on reality shows where a camera is following a person, there’s so much more depth to a person. Don’t you think? As much as you see and read, you still don’t know the vastness of what is going on in someone’s unedited mind. It’s ignorant to think otherwise.

And no matter how much you know about someone, the truth is you know nothing. I find this out all the time when people I think I could trust throw me a curve ball. People are not fixed. They are changing … constantly. So for anyone to take any person for granted and think they know everything about them and that there is no mystery, especially because of how much they write on the internet, it’s a wrong way to think. Someone who bombards the world with selfies and writes anywhere between 200 to 1000 words per day on the internet is not a good interpretation of someone’s “life” — not even a 10th of it, if you really think about it.

No matter how much someone shares, people are always a mystery, holding on to something deep and dear that you’ll never know. 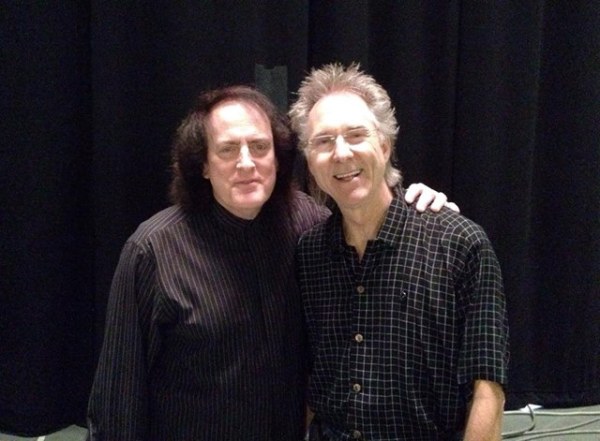 Last night was phenomenal! Very rare do you get to see two legendary acts in one night. My husband Dennis and I were waiting for this night all summer!

It was a perfect late summer night, a bit chilly, but nothing a hoodie and blanket couldn’t cure. The show was hosted by the legendary Cousin Brucie.

Gary Puckett hit the stage around 8:30 or so and played a very long time. He did all of his hits “Over You,” “Woman, Woman,” “Young Girl,” and “This Girl is a Woman Now.” Plus he did a medley of hits from bands he toured with in recent years like Three Dog Night and The Turtles. He also did a tribute to the veterans and at the end of his show thanked God for the glory.

Puckett’s voice is still amazing and he can also pull off hits of other artists. And he looks just as good — at 71 he could easily pass for late 40s. After the show my husband and I went to meet him at the merchandise table and he was very down to earth.

This was another one of many times my husband and I went to see Tommy James perform. Once again, he did not disappoint. He did all his great tunes, including my favorites “Crystal Blue Persuasion” and “Crimson and Clover.” He did “I Think We’re Alone Now” twice — acoustic and electric.

He also spoke about the upcoming movie based on his life and his journey with Roulette Records. Can’t wait!

We didn’t stick around to meet Tommy because it was getting very late and I had to present a lecture this morning. We met Tommy a few times before, plus I once had the honor to interview him. I’m sure we’ll meet Tommy again someday though.

Thanks for a fabulous show, Tommy James and Gary Puckett! For songs that gave me chills when I was a little girl and too young to know what you’re singing about. But, boy, I was feeling it!

The stadium was packed with over 17,000 people! And out of all those people, we were lucky to spot our friends Mair and Paul! 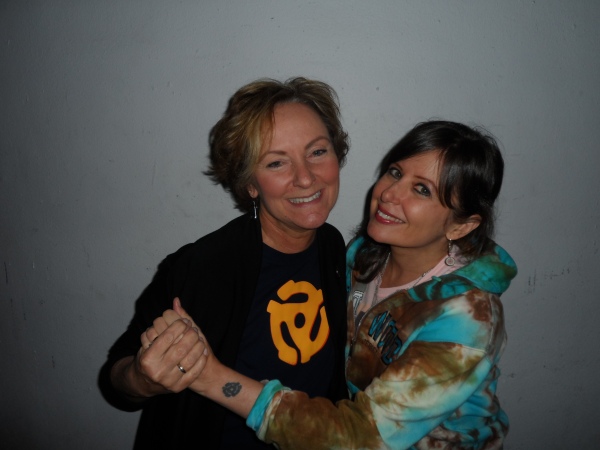 Here’s a little magic for you all!

And one of my favorite songs Tommy never does (at least not when I’ve seen him). If you are reading this, Tommy, please do “I Love You Love Me!” 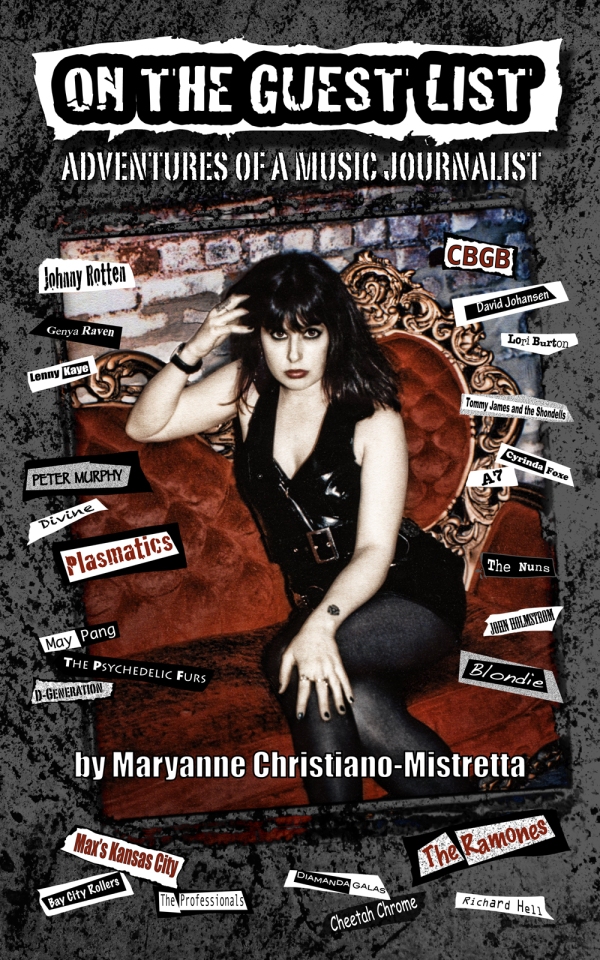 My book, “On the Guest List: Adventures of a Music Journalist”

Today I’m thrilled to be back at the Sayreville Public Library, Parlin, NJ to be giving a creative writing class and signing my book, “On the Guest List: Adventures of a Music Journalist.”

Outside the gorgeous Chester Library

Thanks to The Chester Library for having me present my lecture: “Newsies: History of the Newspaper Industry” last night. The town is absolutely gorgeous and so is the library. I hope to come back some day!

For more information on lectures I have to present, visit my website: www.peartreeenterprises.com 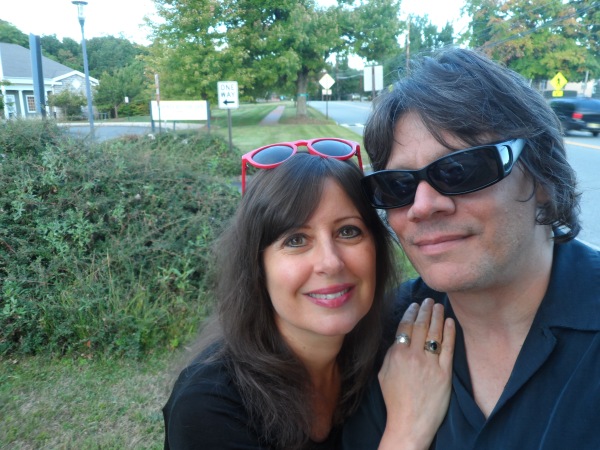 Enjoying the fresh air with my husband, Dennis 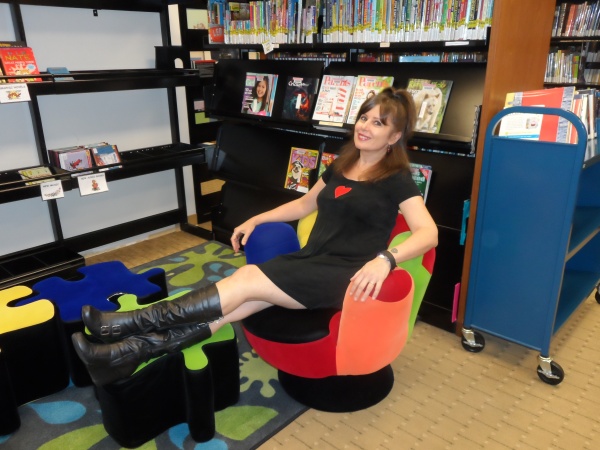 My “office” for the evening! 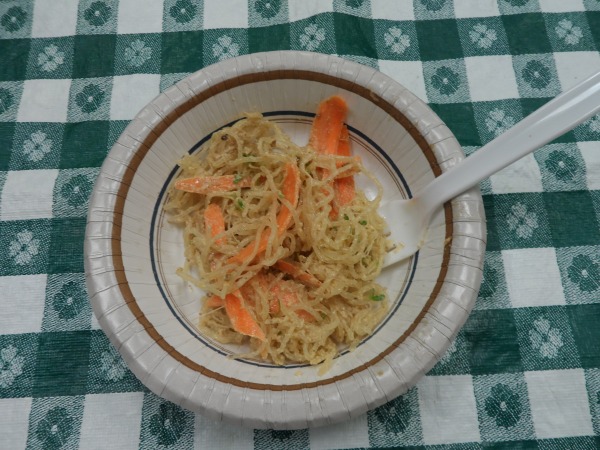 Last night was the second time I lectured to the cooking club at Washington Township Library in Long Valley, New Jersey. (Thanks to librarian Jane Gold for having me back again!)

The topic was “Healthy Pasta Alternatives” and we had a wonderful turn-out with people wanting seconds!

My dish was made of  kelp noodles, carrots, and sprouts with a dressing of raw almond butter, coconut amino acids, onions, garlic and juice from fresh limes.

Here is the description of the class:

Pasta, a typical dish of unleavened dough of durum wheat flour, has been a traditional Italian staple, dated back to 1154 in Sicily.

It can be presented in a variety of shapes and made with flour from cereals or grains, and eggs. It’s a simple dish that can be served hot or cold, varying in taste, color and texture.

Discover how pasta evolved and changed over time – from a small simple item to an elaborate culinary dish.

Learn about the nutritional value of pasta, which contains complex carbohydrates, essential nutrients such as iron, vitamin B and folic acid. And depending on the flour, may also be a good source of protein.

This presentation will include a cold pasta salad made with one of the healthy noodle alternatives.

Class is limited to an audience of 20. Please have a sign up sheet.

I can be reached via email at: maryannechristiano@gmail.com

GENIUS! And proud to say I’ve get them all covered (except maybe burning bridges, but I have my own spiritual theory on that!)