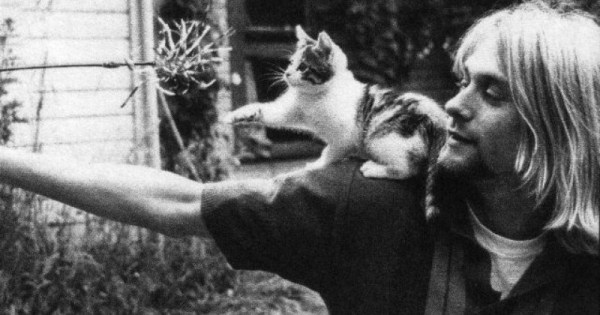 In this study, men who had dating profiles with cats in the photo were viewed as less masculine and more neurotic.

I disagree. Men who love cats, or animals in general, are strong, good providers, fun to be around, intelligent, and sensitive. And I’m not only speaking about my husband, but the husbands/long term partners of my dearest friends. (And a few single men I’m friends with who love cats!)

When I was single, my cats were a great measure in choosing who was good for me. The great guys were the ones who bonded with my cats. Even if someone was not quite a match for me, I’ll still remember him as a good catch (for someone else) because of how he interacted with my cats. The losers…urgh, I’d like to forget them but who can forget when your cat pisses on the jacket of an asshole. Pretty funny! A very good cat who never misbehaved did that. He was letting me know in a subtle way, “beware” and he was right.

It wasn’t too long ago we were reading cool articles like this, Cats & Women: Why the Connection

Any random girl can dislike cats for whatever reason. But an entire study of females being “anti-cat” is something I just can not understand.

Back in my day, girls met potential dates in bars/clubs. I caught the tail end of online dating, so I don’t have much experience there. Like other women, I did have my laundry list. But it never occurred to me to put an animal on the deal breaker list. My deal breakers included: no smoking, no one obsessed with sports, no mama’s boys, no one who is verbally/physically abusive.

But “no cats”? Why would that be in a dating profile?

Perhaps a woman would be jealous of a man’s relationship with a cat? (I actually addressed that issue in Love Cats!) It’s not that far-fetched. Women can be catty (pun intended!). This can actually be a red flag for a guy! If a woman is jealous of your pet, would she also be jealous of your future son or daughter? Hmmm…..

But, let’s get back to why guys who love cats are AWESOME. You see, the bottom line is, cats are not instant-lovers like dogs. You need to nourish them and spend time with them in order to get them to come out of their shell. And if a man can take an independent cat and turn him/her into a playful, needy, snuggly bunny who runs to the door like a dog when he comes home, that man is a keeper! I should know, I married a man bonds with cats like that! And though we don’t have kids, I can only imagine what a good father my husband would be. In many families, pets are the stepping stones to children! (But let’s not count the idiots who give up their pets when they have kids!) Good pet parents equal good parents, period! It simply makes sense.

Perhaps single ladies need to re-think their views on men with cats. They may be missing out on a great one — and staying single a lot longer than they want to.

Maryanne Christiano Mistretta is the loving cat mom to Nicholas Gray and Sammy “Whammy” Keane Clemens. Her book Love Cats is written under the pen name Krystianna Mercury and available from Flamingo Media. 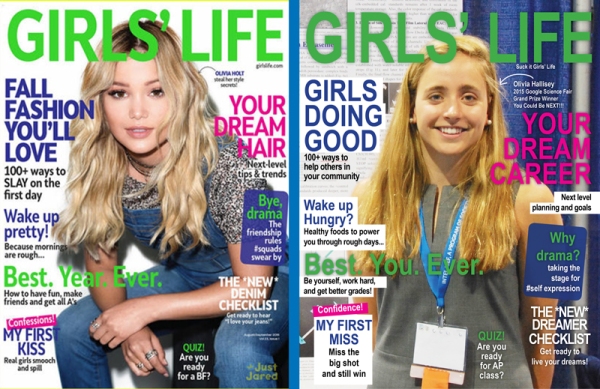 Recently, an “appalled graphic designer” changed the cover of Girls’ Life to her liking. Apparently, the original cover wasn’t empowering to young women. You can read the article here: https://womenyoushouldknow.net/appalled-graphic-designer-shows-girls-life-magazine-what-their-cover-should-look-like/

My response is something not many women want to hear, but it’s a reality that isn’t talked about much.

I came from a broken home. My mother worked two jobs to support two girls. I went to a prep high school and did excellent freshman year, but because we lacked the funds, I had to transfer to a public school, which I hated.

Bottom line, I graduated by the skin of my teeth and went straight to work, without college. Nevertheless I got opportunities and became what I wanted to be — a writer!

The first magazine I worked at, I KNOW I was hired because of my looks (back then, I am now in my 50s and just mediocre). And I am fine with that because back then I had nothing else to go on. Prior to that I was a waitress, drinking on the way to work, because I lost my dear grandmother who helped raise me and I felt devastated. I felt hopeless day in and day out. Not every woman is born an Einstein; and not every woman has opportunities. Some of us work very hard at it and if being cute and stylish gives some of us an edge, why not? At the time it might be all we know.

Her fiction book “Love Cats” second printing is now available, under the pen name Krystianna Mercury, from Pink Flamingo. You can purchase it here: Love Cats 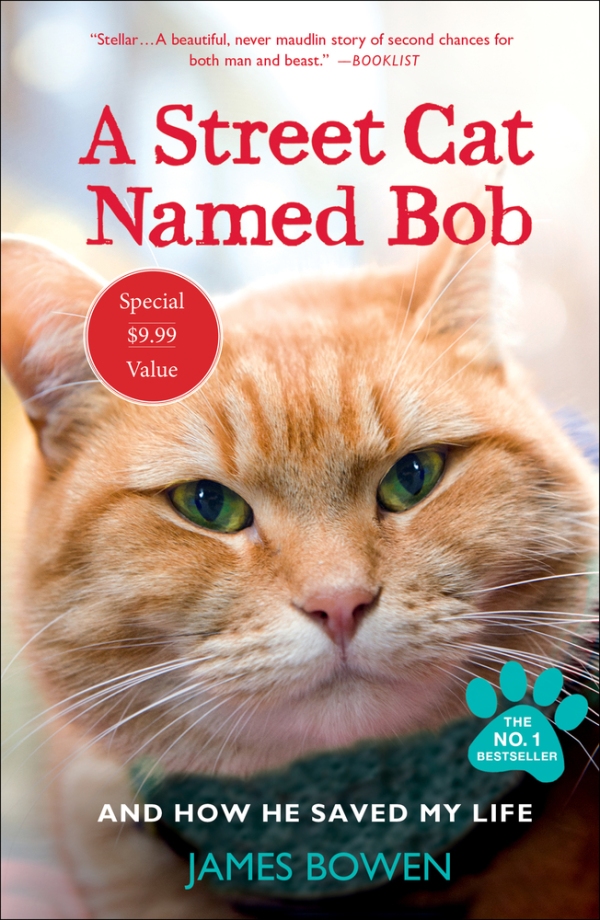 A Street Cat Named Bob by James Bowen became an instant NY Times Best Seller back in 2012. I was busy writing my own books back then so I wasn’t yet aware of it.

However, after I had to put my beloved cat Bennie down, early 2019, I joined a cat book club to help heal my pain. (But of course, we never quite get over the loss of a pet. It’s impossible). The first book we read was Strays by Britt Collins. I enjoyed that book and when I read the reviews it was compared to A Street Cat Named Bob by James Bowen. I purchased it immediately and fell in love with! I read (and re-read) all three books in the series, watched many You Tube videos, and followed Bob on Facebook.

For those who don’t know Bob, he was a stray who was found by James Bowen, a recovering drug addict and musician who busked in the streets to make ends meet. The story of James and Bob became a book, then a movie! (I loved the movie, but of course I loved the book better!) Here is the link to the book: A Street Cat Named Bob

And, for a real taste of Bob’s personality, there are tons of videos on You Tube where you can see Bob sitting on Bowen’s shoulders while he sings and plays guitar; Bob giving Bowen a high-five with his paw for exchange of a treat; and Bob at Bowen’s side during their celebrity status on TV talk shows. It’s all so endearing–Bob had what you call PURR-sonality! He was not only a smart cat, but a very cute one too! Who could resist that pudgy face and piercing green eyes?

Millions of cat lovers fell in love with Bob; and millions are now mourning him. There is definitely a hole in the hearts of many who looked forward to Bowen’s updates on Bob. Everyone just loves a feel good story with a happy ending. And cat lovers get a kick out of the funny things they do.

Well, this is another terrible thing to put on the list of this awful year. My heart goes out to James Bowen, his fiance, and their other cats. And to all the millions of Bob fans. Cats are special creatures. They touch our souls so deeply, giving us so much love and support. You just have to pay attention to cats–give them a bit of love and watch the magic happen! The story of James and Bob is proof of that! 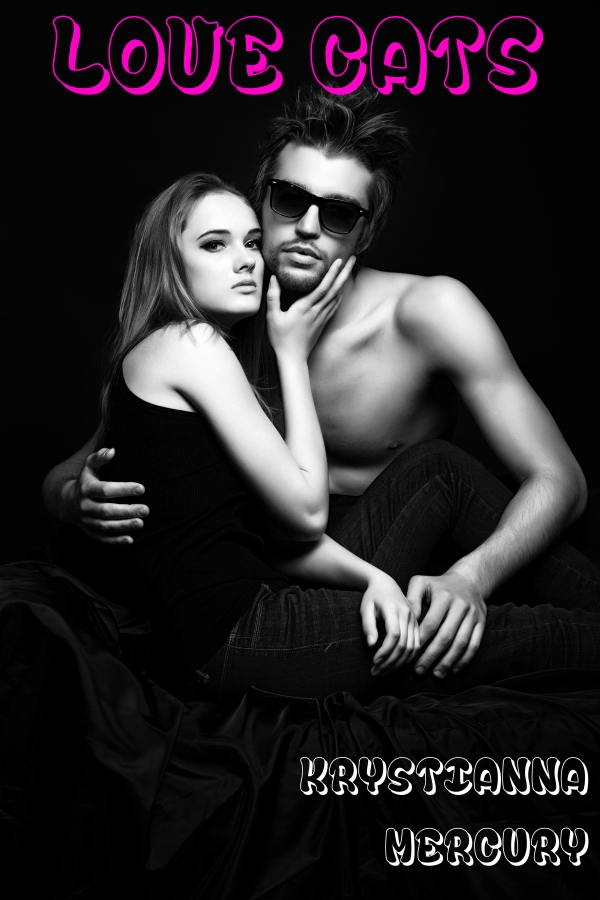 “Love Cats” by Krystianna Mercury
With all the tragedy happening, I was hesitant as to when to write about the second printing of my book “Love Cats.” (Krystianna Mercury is the first time I’m using a pen name. You can purchase directly from Pink Flamingo: Love Cats).
I’ve decided that making my announcement today, National Old Maids Day would be appropriate, because it’s a day to support single and childless women.
In “Love Cats” (Love Cats) I address the “old maid” issue via my character Janey.
Janey starts out as a smart character who wants a guy with substance. Though when she meets one, her insecurities get the best of her and she subconsciously does everything she could to kill the relationship. Though the difference between me and her is that while creative success is what drove me, Janey doesn’t need any kind of success as she’s already a wealthy trust fund and she’s simply driven by her own selfishness.
Whatever motivates us to stay single (work, fear, waiting for the right one, etc.) I think it’s super cool that in these modern times women are viewed as so much more and we no longer have to live in “shame” because we aren’t hooked up.
I tell everyone who asks my advice, to wait. Wait until you meet that one of a kind soul mate who rocks your world. There is no need to settle. Nor was there a need to settle 30 years ago either, we just took more shit from people for not settling. I’ve avoided certain relatives for years because they were more interested in who I was dating and how serious it was. Not my career, not my interests, not my dreams or desires. Just who I was dating and if marriage was in the cards.
I dreaded those horrible questions, yet stuck to my guns and never settled.
Mind you, when I say “never settled” while I did date a ton of jerks, I also dated some really cool guys — just not right for ME. I am still friends with some of these guys and my husband likes them too. We are so blessed that we have such an honest relationship with each other. And his ex-girlfriend’s brother is my favorite of all his friends! And that’s another cool blog for a later date, how trust is the most beautiful thing in a relationship.
But back to Janey …
In “Love Cats” Janey’s live-in maid, Lucia refers to her as an “old lady” for not having a ring on her finger — and she’s not even 25 yet! But that’s how it was in the 1980s. So much pressure for a young girl trying to find herself. Too much noise from the peanut gallery. Urgh!
It’s so cool that it’s acceptable today for women to live at home longer, concentrate on their careers, and not even marry at all if they don’t want to. Even though I’m married, I can sigh with relief that there is no pressure on me to bear children and raise a family. My husband and I are perfectly fine with our little love cat, Derick. Life is so good when you don’t have the rest of the world throwing their desires in YOUR face. We’re so blessed to exist in a live and let live time. Let’s keep it that way!
We’ve come a long way baby!
THANK GOD!