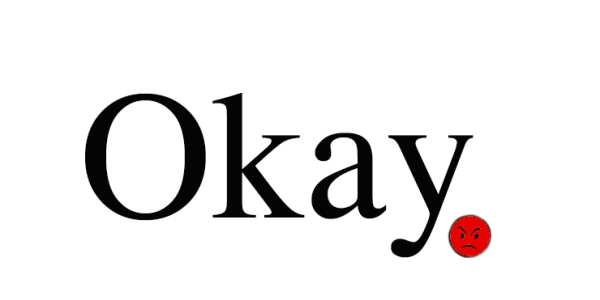 When did society stop being cool?

Even in the 1990s we still used peace signs and said things like “jazzed.” Then fast forward to the 21st century and we’re using awkward words like “gelly” for “jealous” and “besties” for “best friend.” All this modern day baby talk makes me cringe. But the most cringe-worthy of all is those ever-so-annoying email responses that simply read “okay.” No “love” no “xxoo” no “gotcha” … just “okay” with an angry period.

Or at least the period seems angry, as a simple “okay.” is so hard to translate via email. You wonder, “Is something wrong?” “Is this person mad?”

If the person sending the email at least took an extra two seconds to add a “cool” next to the “okay” — “okay, cool!” then you see the difference, right?

“Okay” is only cute in the real world, especially when comedian Andy Kaufman used to say, “Okay? OKAY!” It should never, ever, ever be written in an email because the translation is obnoxious and condescending. It’s the equivalent to the passive/aggressive: “yes, dear” or “fine.”

Then to use words said by even more annoying types, no I am not “over-reacting” or “too sensitive” nor do you have to “walk on eggshells” around me.

I’m just an old-fashioned romantic. Someone who prefers people in general to go the extra mile. And I don’t care if you’re only typing with your thumbs. Make the effort to put “love” or “best wishes” or “hugs” or even a smiley face at the end of an email. Show the person you’re writing to that they are worth it and that you like them, so they know you’re not mad. Isn’t it so much better to imagine the person on the receiving end of an email smiling, not worrying about why you wrote back a one-word answer?

So let’s make our lingo hip again, whether it’s spoken in real life or in your email.

Honestly, the only time a friend should stop another friend from doing something is if they are harming themselves. And the first thing that comes to mind is — drugs.

Other than that, anything anyone wants to do, it’s their life they should be encouraged by a good friend — or anyone for that matter — to follow their dreams! Unlike drugs, dreams are healthy and if you can make them come true, even better!

Years ago, I was working as a journalist in the newspaper industry. I was living on my own for about 15 years and to cut corners I used mass transit instead of having a car and insurance payments. It wasn’t a problem and I never wanted for nothing — I had both a bus stop and a train station within my block.

When I was dating my future husband for about a year, we decided to move in together. He lived in a house in an area that mass transit was lacking, so I needed a car. My husband drove a PT Cruiser and I fell in love with it. I wanted my own.

My biggest mistake was casually sharing my dream with a co-worker. This woman shot me down immediately saying, “Ew, those cars are so uncomfortable!” From that moment on, I avoided this woman like the plague.

How dare she rain on my parade! If I felt the car was uncomfortable when I took it for a test drive, I wouldn’t get the car, right? Common sense, no? I did not need her ugly opinion and to this day I will never forget how crappy she treated me when I was excited about something. Needless to say, I ended up getting a PT Cruiser and enjoying it for several years before I got a new car!

It’s so sad that people are more in a bad habit of cutting people’s dreams down instead of just going with it. We’re all individuals and have different dreams and desires. Many people have dreams that are different than mine, but I won’t insult their dreams, I’ll always be happy for someone when they get something they want in life.

It’s not being “dishonest” if you are encouraging to someone who shares their dreams with you and you don’t necessarily agree with them. It’s being a good person — being someone who can take their mind off of themselves for one frigging moment and tell another person that you are proud of them or ecstatic for them!

If you’re not in the habit of doing this, regularly, I highly suggest you start. Because being a “Debbie Downer” makes a person undesirable.

My husband recently shared with me that he thinks “everyone” love me. I laughed because sometimes it doesn’t seem that way. I’ve had many people shoot down my dreams and it makes me secretly wonder if that’s their way of telling me they don’t like me. Or maybe they just have diarrhea mouth and are vomiting their hate using me as a punching bag. And that doesn’t feel too good, so that’s when I start avoiding people (like I avoided the co-worker many years ago). 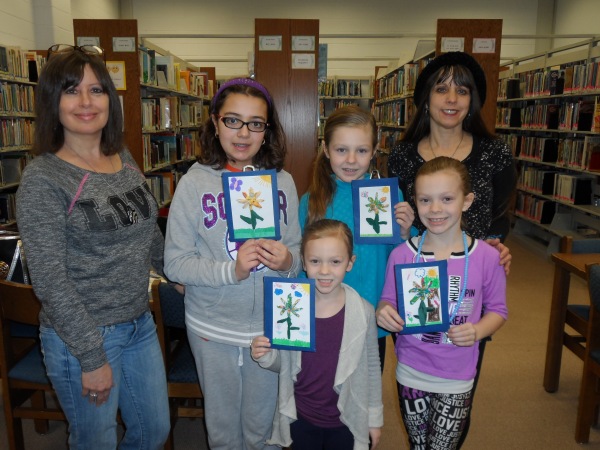 “Make Art Out of Recyclables”

(Photo of children used by permission from parent)

“Make Art Out of Recyclables” was held yesterday at the Garwood Library, Garwood, New Jersey.

This program is available for libraries, schools and private parties.

“Make Art Out of Recycables” is affiliated with Pear Tree Enterprises (www.peartreeenterprises.com)

Recycling is not only good for the environment. When creative sparks fly, old junk and trash can become a child’s masterpiece!

Whether it’s making robots out of old cereal boxes, dolls out of Q-tips, puppets from old socks, or “designer” footwear from old buttons, children will have a blast at this informative, fun, inter-active class which is geared towards children ages 6 to 10.

Each class is different, according to seasons and materials available. Classes are limited to 20 children, so must have a sign-up sheet. And so that no child gets left out, we do offer discounted “back-to-back” programs.

Class is conducted by award-winning journalist, author and public speaker, Maryanne Christiano-Mistretta with assistance from various artists and teachers who have worked with children.

The other day I took offense to a friend saying I was “lucky.”

“Luck” is not a word in my vocabulary.

I’m truly of the mindset that everything we have is because we’ve attracted it into our lives with wisdom and creative visualization. When people say I’m “lucky” to have an amazing husband, I’m not. I’m blessed because I was smart enough to not settle for the first guy who came along. I fell madly in love with someone I’m super attracted to and adores me equally.

I’m not “lucky” to work with friends — I am intelligent enough to refuse to work in a stressful environment with negative people, therefore I purposely choose the wonderful people I like to build my career around. I’ve spent years doing things on my own until the right girlfriends came into my life. Luck has nothing to do with anything.

When you take a moment each morning to spend in prayer and gratitude and have been doing so almost 20 years; when you have studied Gurdjieff since the 1980s; when you are not afraid of sitting in traffic or being in your own company because you don’t know what “boredom” means since you are in love with yourself and the mind is always going — THAT, MY FRIEND is not luck. It’s called WISDOM. (And mine came at a young age rather than an old age. Since 19, I’ve been told I was wise for my years).

Last autumn I was hired as an extra for a commercial, as they needed people in both their 20s and 50s (I’m in my 50s). It’s a new product called Steptek.

The commercial is only two minutes long if you want to check it out: https://www.kickstarter.com/projects/458342395/steptek-an-accurate-simple-and-data-secure-pedomet

I had such a great time working with all the actors and I believe in the product. Brian Epstein is the person who produced it.

I hope to someday work as an extra again! 🙂

A few years back, I was having dinner at Nobu Next Door. Mind you, I’m not a fan of foo foo restaurants – I prefer a home-cooked meal or the ambience of a super cool retro diner with a waitress of a certain age chewing gum and calling you “honey. But since a friend wanted to go badly, I went.

So there I was at that over-rated Nobu Next Door and seated at a nearby table is an overweight obnoxious guy in his 40s (which seemed so old at the time since I was still in my 30s) and he was with two badly plastic faced aging models.

At the top of his lungs, he kept bragging about “MY HOME IN THE HAMPTONS!”

He must have referred to his “home in the Hamptons” at least six times during the course of his meal. (And mind you, I’ve been to the Hamptons too — no great shakes).

Anyone who has been to Nobu Next Door knows how tight the place is. When I got up to go to the bathroom, I accidentally knocked over my bottle of sake. The Hamptons guy stops bragging about his home in the Hamptons and says to me, “You are very entertaining.”

I looked him right in the eye and said, “Then you must have a very boring life!”

He didn’t know what to say.